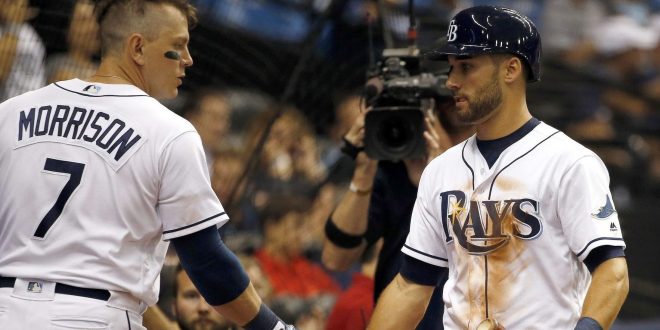 Rays Scratch Their Way Back to .500; Marlins Take Tough Loss

The Tampa Bay Rays finally worked their way back to .500 in the AL East and the Marlins drop 1.5 games behind the Nationals in the NL East after Wednesday night’s matchups.

After starting the season slow in the AL East, the Tampa Bay Rays are now .500 after beating the Detroit Tigers 8-7 Wednesday night. The game was very strange and in the final inning, in what was supposed to be an easy double play to end the game, Jose Iglesias stumbled and made an error. The Tigers already came into the game short of star Justin Upton. The Rays went up early in the game 5-1. Then in the fifth inning, Rays pitcher Chris Archer who didn’t have his best game of the year—gave up three runs. He was pulled from the game after the fifth inning and that was when the Tigers took advantage.

The Tigers turned it from a 5-1 deficit to a 7-5 lead. Detroit kept that lead, giving up only one run by Alex Wilson. Most of the games’ action came in the last inning. With a one-run lead, Tigers closer Francisco Rodriguez came into the game. He walked Kevin Kiermaier and then gave up a double to Evan Longoria.  This put runners on second and third. Rodriguez and the Tigers coaching staff then intentionally walked Brad Miller which loaded the bases.

The next batter was Steven Souza who went to check swing and struck out. This is where everything went bad for the Tigers. With one out, Logan Morrison took the plate and hit a grounder to second base. Jose Iglesias was ready to make a double play to end the game and he stumbled and collided with Brad Miller who slid into second. In a game that was very strange for both teams, one had to come out on top and it happened to be the Rays.

This helped pitcher Austin Pruitt get his first Big League win. Other key players for the Rays in the game were Kevin Kiermaier and Evan Longoria who each had three hits. Kiermaier had half of the Rays scores with four runs and Longoria had three RBI.

Key players for the Tigers were Miguel Cabrera who had three hits and two runs. Additionally, Nick Castellanos had two triples for the Tigers. This helped them to overcome the four-run shortfall and put them ahead of the Rays heading into the ninth. The two teams will play again Thursday at 1:10 p.m. in their final game of the series.

Tigers: LHP Daniel Norris (1-0) will get the start for the Tigers. He is coming off six scoreless innings Friday night.

Rays: RHP Erasmo Ramirez (1-0) will make his first start of the season.

Marlins Fall to the Mariners

The Marlins (8-7) traveled to Seattle to face the Mariners (7-9) yesterday as well.

Former Mariner and current Marlin Ichiro Suzuki returned to Seattle for what could be his last time at Safeco Field. He went out in fashion as he hit a solo home run on the first pitch of the ninth inning. This is the veteran’s first on the road in almost four years and it came in what is most likely his last at-bat in Seattle. Left fielder for the Marlins Christian Yelich said he was excited to see Ichiro hit a homer on what could be his last at-bat in Seattle.

Rookie Mitch Haniger is having a great start to the season, as he extended his hitting streak to 13 games. He drove in four runs and had a major impact on the game in the first four innings. He is hitting .323, unheard of for a rookie and is taking the spotlight while Jean Segura sits out with a hamstring injury. Other key players for Seattle were Kyle Seager who had four RBI’s and Robinson Cano who had two hits and two runs.

For the Marlins, Yelich and Giancarlo Stanton had pretty good days, both with three hits. They each had a home run along with Ichiro. Yelich had two runs and two RBI’s and Stanton had one run and one RBI.

Up Next for Each Team

The Marlins will open a series in San Diego. Adam Conley (1-1) gets the start Friday. The Mariners will travel to Oakland as James Paxton (2-0) will get the start Thursday.