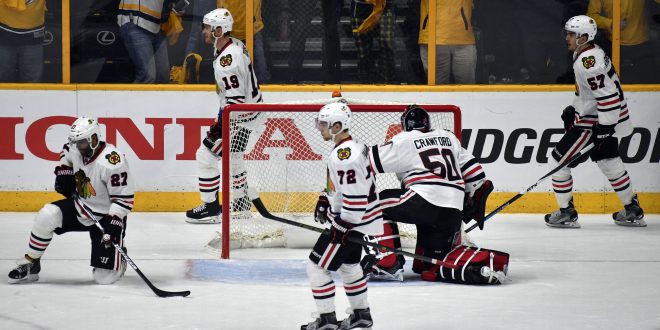 The first round of the NHL Playoffs continues tonight with each team on their quest for the Stanley Cup. The road has been a long and daunting one, but the process of elimination has begun.  The Calgary Flames lost last night, making them the first team to be eliminated from the playoffs.  Two teams tonight will look to avoid a loss or their season will end tonight as well.

It's do or die for the Blackhawks as they fight to keep their season alive tonight in Nashville. #CHIvsNSH

With a 3-0 series lead, the Predators will look to eliminate the No.1 seeded Blackhawks.  Fortunately for the Predators, history is on their side with only four teams having ever been able to bounce back from a 0-3 hole.  Blackhawks head coach Joel Quenneville has been in this hole once before with Chicago back in 2011.  The Blackhawks rallied back to force a Game 7 but failed in the end against the Vancouver Canucks.  If the Blackhawks get eliminated, the Predators will have certainly shocked the hockey world.

The series is currently tied at 2-2 after the two sides split the first four meetings.  Both teams are looking to end their Stanley Cup droughts.  The Oilers haven’t won the Stanley Cup in 26 seasons (before the Sharks were founded) and the Sharks have never won a Stanley Cup.  Hammering the Oilers 7-0 their last time out, the Sharks will look to continue their momentum by getting a win on the road.

The Bluejackets are on the verge of elimination as the Penguins have a 3-1 series lead.  However, the tide may be turning as the Bluejackets won 5-4 on Tuesday, marking their first postseason victory in regulation time.  The Bluejackets need to continue keeping Sydney Crosby in check if they want to come back in this series.  They have a long road ahead but are indeed capable of coming back in the series.

Locker room set for the #Blueshirts in Montreal! pic.twitter.com/nNW8uW4yOj

The Rangers and Canadiens are currently in a deadlock with each team winning two apiece.  The series has been competitive with great play from each goalie.  The Rangers won 2-1 in Game 4 and will look to build off of that win.  Both teams this season have been road warriors, as the two teams hold the most road wins in the Eastern Conference.  This will be a hard-fought battle between both teams no matter where the game is played.

The NHL Playoffs is still alive for all the teams that play tonight.  All of these teams will give it their all and play with heart.  However,  only one team can become Stanley Cup champions.