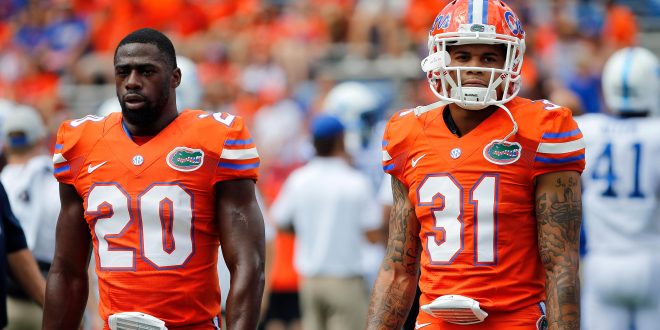 Rounds two and three of the 2017 NFL Draft were huge for the Florida Gators. There were three former Florida Gator players to go during the second round and one to get drafted in the third round.

Round 2 of the 2017 NFL Draft might as well have been named “Round Gator DBU”.

Marcus Maye was the first Gator to be drafted in Round 2, and the second overall Florida Gator to be drafted in the NFL. The New York Jets drafted Maye with the 39th overall pick. This is a great pick for the Jets; they entered the NFL draft basically looking for every position. Last season, they got picked apart in the secondary and do not have a lot of depth. Therefore, after picking LSU’s safety, Jamal Adams, in the first round, another safety was a good idea.

Jets Head Coach Todd Bowles was the defensive coordinator for Arizona two years ago, so he has a defensive mindset. Maye is versatile and consistent, so we will be a good contributor to the Jets special teams, just like he was for the Gators.

Quincy Wilson was the next Florida Gator to be drafted into the NFL this season. The Indianapolis Colts drafted Wilson with the 46th overall pick. Similar to the Jets, the Colts used both their first and second round picks on the same position, defensive backs. The Colts new General Manager Chris Ballard looks as if he is focusing on improving their defense, after picking Ohio State safety Malik Hooker in the first round and now Quincy Wilson in the second. Wilson finished his 2016 season at Florida with a total of 33 tackles, three interceptions, and six pass break-ups.

With the 53rd overall pick of the 2017 NFL Draft, the Detroit Lions selected Teez Tabor. Tabor is the second Gator heading to Detroit this season. The Lions selected Jarrad Davis during the first round of the draft. Tabor was the third and final Florida defensive back to be taken in the second round. The Lions took advantage off selecting Tabor in the second round. Tabor was originally projected to be drafted in the first round until scouts saw his performance at Florida’s Pro Day. Tabor was reportedly in the 4.7s for the 40-yard dash, which caused him to move down in mock drafts.

For the third round of the draft, the only Gator to be drafted was linebacker Alex Anzalone. The New Orleans Saints drafted Alex Anzalone with the 76th overall pick. This was a great pick for the Saints because of their need to build up their defense. After selecting a cornerback and a safety in the first two rounds, a linebacker is just what they needed to continue to fill their defense, especially since Anzalone is capable of playing all three linebacker positions. Anzalone has the desired size and athleticism New Orleans is looking for him to fit in any defensive scheme they may employ.

Overall, it was a great night for the Florida Gators. Stay tuned to WRUF to keep up to date with the draft during Saturday and Sunday.

Sydney is a senior studying telecommunications with a specialization in sports media at the University of Florida. She is a multimedia sports reporter for ESPN 98.1 FM/850 AM WRUF and WUFT-TV.
Previous Alex Anzalone Drafted by the New Orleans Saints
Next Recap: Day 2 of the 2017 NFL Draft