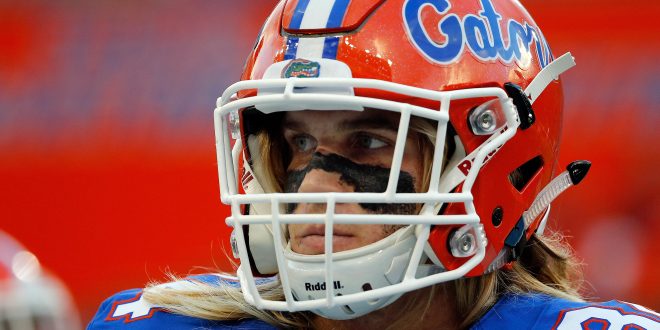 For the 76th overall pick in the third round of the 2017 NFL Draft, the New Orleans Saints selected former Florida Gators Linebacker Alex Anzalone. Anzalone entered into the NFL Draft as a redshirt junior, forgoing his senior season with the Florida Gators.

OFFICIAL: Alex Anzalone is going to be a Saint. NOLA gets a ferocious linebacker. #NFLDraft #Gators pic.twitter.com/R4Ji7BqLdX

What Anzalone Can Bring to the Saints

Anzalone started at UF during the 2013 season, but only had two tackles due to several injuries. During the 2014, he totaled 14 tackles with one tackle-for-loss and earned the team’s Chris Patrick Courage Award. In 2015, he suffered another shoulder injury and only played in two games. Therefore, the 2016 season was definitely his best and he was able to show scouts his true ability.

Anzalone played the first 8 games of Florida’s 2016 season until he suffered another injury at Arkansas where he broke his forearm. Even with his injury ending his season, he was still ranked third o the team with 53 tackles. He tallied three sacks, six quarterback hurries, two pass breakups and one fumble recovery. He had a career high of 6 tackles against Tennessee.

According to NFL.com, Anzalone has the desired size and athleticism teams are looking for to fit in any defensive scheme. Anzalone is capable of playing all three linebacker positions, which will make him very versatile for the (team). Due to all of his injuries, Anzalone’s weakness is his durability. He had no forced fumbles or interceptions at his time at Florida. However, if he can stay healthy, he will be a great asset to the Saints defensive, possibly becoming a solid three-down starter.

Sydney is a senior studying telecommunications with a specialization in sports media at the University of Florida. She is a multimedia sports reporter for ESPN 98.1 FM/850 AM WRUF and WUFT-TV.
Previous Teez Tabor selected by Detroit Lions in Second Round of NFL Draft
Next Florida Gators Drafted in the NFL: Rounds 2-3