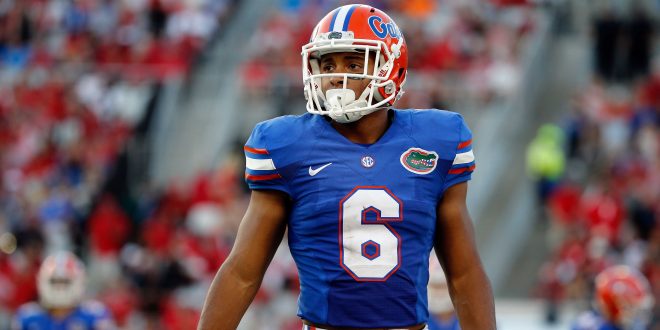 Quincy Wilson Drafted in Second Round by Indianapolis Colts

The third Gator off the draft board, Quincy Wilson was selected by the Indianapolis Colts in the second round with the 46th overall pick.

Wilson is the second DB taken by the Colts in this draft after they selected Ohio State safety Malik Hooker in last night’s first round, as new GM Chris Ballard seems to be focusing on beefing up the Indianapolis defense. Wilson can expect to see early playing time, as the only solidified corners on the team are Vontae Davis and Darius Butler. Since Butler plays mainly in the slot though, Wilson might be able to start in that second outside corner back role.

OFFICIAL: Quincy Wilson will be a Colt. Indianapolis now has him and Vontae Davis in the secondary. #NFLDraft #Gators pic.twitter.com/2NWDTdRhaW

Weaknesses: “Hips and feet can be exceedingly sticky in his transitions. Will fight his feet a little in his backpedal and shuffle. Footwork average in space.”

Check out our breakdown of why @dc_wilson954 is one of the top DB prospects in this year's #NFLDraft pic.twitter.com/zTQsRuFKqi

Wilson came into his junior season as the perceived second best corner on the team behind Teez Tabor. Tabor was the one that came in with the hype and expectations after playing alongside first-round pick Vernon Hargreaves the season before.

Wilson played like a shutdown corner though, forming part of a strong secondary that helped Florida to a second straight SEC Championship Game appearance. He started all 13 games this past season, and recorded three interceptions, including a pick-six against Missouri. His strong play made him a second team All-SEC selection. By the end of the season, Wilson had joined Tabor as a potential first-round pick.

Wilson continued to boost his stock through his strong showing in the combine. He posted a 4.54 40-yard dash, which is good speed for his 6’1″, 220 lb. build. He gained momentum leading up to the draft too, with an NFL exec calling him better than Tabor in “every area”, according to SEC Country.