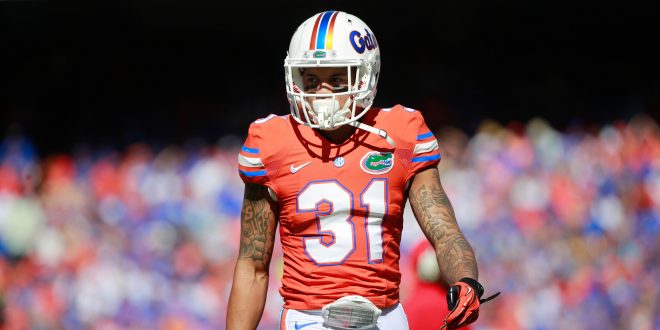 Two picks, two Gators for the Detroit Lions. With the 53rd overall pick of the draft, the Lions used their second round slot to take cornerback Teez Tabor.

Tabor is the the third Florida defensive back to be taken in the second round after Marcus Maye went to the Jets and Quincy Wilson went to the Colts. He joins Jarrad Davis as Gators in the motor city after Detroit picked Davis in last night’s first round.

The Lions have a stud corner already in Darius Slay, but Tabor could fight for time in the second outside/main slot corner role. He’ll be looked to help improve a defense that was at times shaky during the Lions run to the Wild Card round of the playoffs last season, and that also have to face Aaron Rodgers twice a year in NFC North play.

OFFICIAL: Teez Tabor will be joining Davis in Detroit. The Lions take him at 53rd overall. #NFLDraft #Gators pic.twitter.com/0KMuodiC3m

Strengths: “Prototypical size and athleticism. Plays with bouncy feet in coverage. Good initial patience and foot quickness to mirror receiver’s release from press. Has the quick twitch to accelerate and pattern match receivers throughout their routes.”

Tabor declared after his junior season in which he turned into one of the best corners in the country. He did well filling the void left by Vernon Hargreaves, posting four interceptions in the first five games of the past season. Teaming up with Quincy Wilson, they helped form one of the best cornerback duos in the nation, as Florida allowed the second fewest pass yards per game in the FBS (148.5 yards)

His numbers in the combine and his pro-day dropped his draft stock though.

He ran a 4.62 forty at the combine, but instead of improving upon it at his pro day, it actually worsened. He ran it in 4.77 seconds, which concerned teams considering he already wasn’t necessarily the fastest corner in the draft.

Tabor believes his tape is more important than the measurables though, saying scouts should “just press play”.

via SEC Country: “Just press play,” Tabor said. “I feel like I’m at the top of the list (among cornerbacks). You watch the film, it’s really, it speaks for itself. …”

He’ll be out to prove that now with the Detroit Lions.