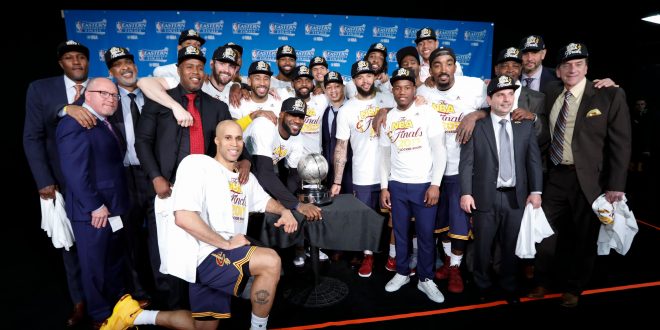 The Cleveland Cavaliers knocked off the number one seed Boston Celtics Thursday night in the Eastern Conference Finals. Despite being in Boston, the Cavs controlled the game with ease, winning 135-102. Their average margin of victory at the TD Garden in the series was 30 points.

After losing Game 3 and having to fight back from a double-digit deficit in Game 4, it did not take the Cavaliers long to assert dominance in Game 5. It took 12 minutes, to be exact. Cleveland scored a franchise-record 43 points in the first quarter.

LeBron James led all scorers with 35 points on 72.2 percent shooting from the field. LeBron also added eight rebounds and eight assists. Kyrie Irving contributed 24 points and seven assists, while Kevin Love notched a double-double with 15 points and 11 rebounds. Another notable performance was by veteran guard Deron Williams. Williams scored 14 points on 83.3 percent shooting off the bench.

It was a catch-and-shoot three-pointer by LeBron James that made him the highest scorer in NBA postseason history, passing Michael Jordan with 5,989 playoff points.

"For my name to come up in the discussion with the greatest basketball player of all time… wow." – @KingJames#StriveForGreatness pic.twitter.com/ZhtABdZtJJ

Just for fun, here are the playoff averages for both Michael Jordan and LeBron James:

LeBron set another NBA record Thursday night as he is now the first player to ever lead two teams to four NBA Finals each—those teams being the Miami Heat and Cleveland Cavaliers.

Let’s not forget: this will be LeBron’s seventh straight NBA Finals appearance.

It is less than a week until the tiebreaker of the seemingly best-of-three championship series. Round one went to the Golden State Warriors. Cavs fans have made their excuses, saying LeBron had no help in the series as he was without Kevin Love and Kyrie Irving due to injuries. Round two went to the Cavaliers after overcoming a 3-1 deficit. Warriors fans took their turn to make excuses, whether it was about Draymond Green’s one-game suspension, or Stephen Curry not being 100% due to injury.

NBA fans are not the only ones who have been looking forward to the NBA Finals “three-match”. Draymond Green said on October 25, 2016, “If Cleveland comes out of the East, I want to destroy Cleveland.”

When, Where and Where to Watch Game 1

Where: Oracle Arena in Oakland, California

Where to Watch: ABC

Previous Who Will Advance To The Stanley Cup Final?
Next Florida Falls Short in Game 1 of Super Regionals