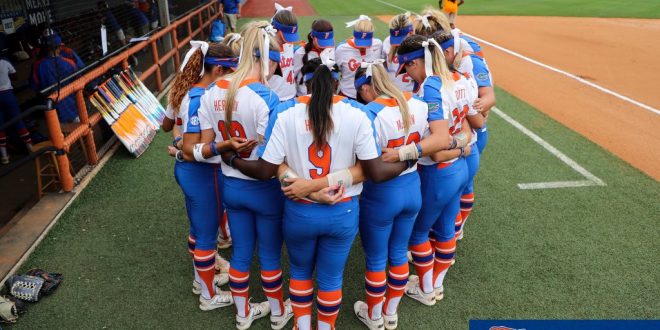 The Florida Gator softball team (53-8) fell short to rival Alabama 3-0 on Thursday night in the first game of the best-of-three Super Regional.

Kelly Barnhill had 11K's in 5 Innings, Aleshia Ocasio kept Alabama off the board but the #Gators fall to the Crimson Tide 3-0 in Game 1. pic.twitter.com/fQ9JmWNWxu

Kelly Barnhill started for the Gators and pitched until the fifth inning when Aleshia Ocasio relieved her. Barnhill allowed three runs, all unearned, and 11 strikeouts, while Ocasio kept Alabama off the board.

In the fifth inning, Alabama reached base on a leadoff walk, followed by a fielder’s choice, two errors and a pair of sacrifices that gave the Tide a lead of 3-0. Alabama scored on throwing errors by the Florida ace Barnhill.

The Gators best chance at scoring came was in the bottom of the fifth inning when two batters were hit by a pitch and Amanda Lorenz walked. Janell Wheaton ended the inning with a 12-pitch at-bat which included seven foul balls. At the end, Florida was not able to put up any runs.

Lorenz went two-for-two with a pair of walks on the night.

Head Coach Tim Walton had a few words to say on Thursday’s match-up against rival Alabama.

Florida will face off with Alabama Friday night for Game 2 of the NCAA Super Regionals. First pitch is set for 7 p.m. and will be aired by ESPN.