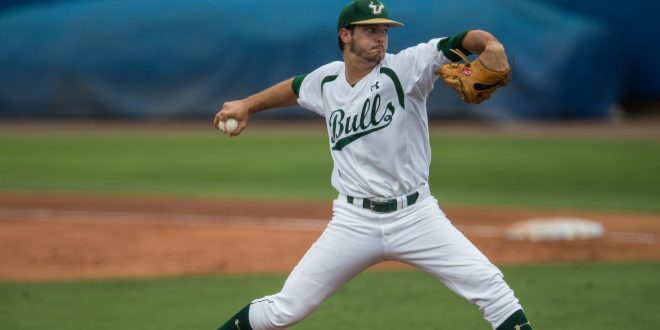 The USF Bulls(42-17, 14-10 AAC) defeated the Bethune-Cookman Wildcats(33-24, 15-8 MEAC) in the first game of the NCAA Gainesville Regional by a score of 9-1. Friday afternoon marked the first postseason meeting between the two schools. USF now holds a 59-16  lead in the all-time series.

The Bulls made quick work of Bethune-Cookman starter Anthony Maldonado. In the first inning alone, Maldonado walked three hitters. USF opened up the scoring when first baseman Joe Genord drew a bases-loaded walk. Sophomore Coco Montes added a sacrifice fly to open up a 2-0 Bulls lead at the end of one. After Maldonado surrendered a two-run home run to Duke Stunkel Jr., Wildcats head coach Jason Beverlin replaced him with lefty Donte Lindsay.

Coco Montes continued his solid day with an RBI-single with one out in the third inning. The Bulls kept the offense churning in the bottom of the fourth inning. Stunkel Jr., who had four hits on the day, led the frame off with a single. Shortstop Kevin Merrell followed up the play with a walk. Third baseman David Villar then doubled to score Stunkel Jr. and advance Merrell to third. Directly after, Isaak Gutierrez entered the game for the Wildcats and threw a wild pitch allowing Merrell to score. The run put USF up 7-0.

USF left fielder Chris Chatfield added some insurance in the sixth inning with a two-run home run, his eighth of the season. The home run tallied the Bulls’ final run of the game and put them up 9-0. Bulls’ hitters totaled 14 hits and drew seven walks.

USF pitcher Phoenix Sanders, who entered the game with a 3.00 ERA, was brilliant all afternoon. The senior pitched seven innings, gave up five hits, no runs, two walks and struck out seven.

The win is Sanders sixth of the year and he’s now 6-2 on the season. Fellow senior Mark Savarese entered in the eighth inning in relief and finished up the final two innings. He gave up one run and struck out three.

USF now moves on to face the winner of the Florida-Marist game. The Gators hold a 60-24 lead in the all-time series against USF and have won two of three NCAA Regional games played against the Bulls in program history. However, in their one matchup earlier this season, South Florida took down the Gators in Gainesville by a score of 15-10. The Bulls have never faced Marist.

USF vs. Florida/Marist: Friday at 7 p.m.

Bethune-Cookman vs. Florida/Marist: Friday at 12 p.m.

I'm an above-average golfer with surprisingly great touch around the greens. Click on my twitter link for some sports talk.
@Ry_McGinn
Previous Marist Prepares to face Gators in Regionals
Next Bethune-Cookman Baseball Team Visits Gainesville for The NCAA Regional 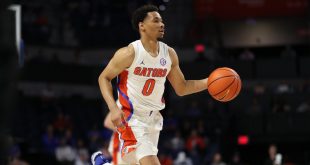