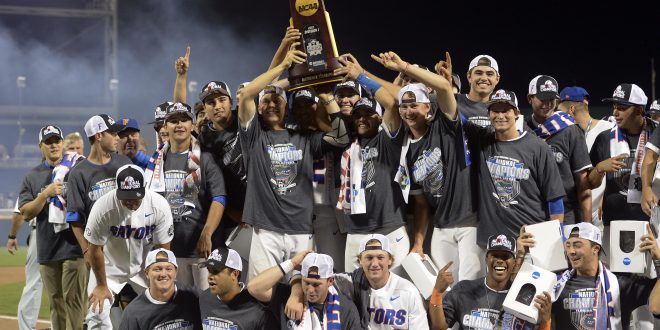 The University of Florida athletics program has finished third in the 2016-2017 Learfield Sports Directors’ Cup standings. This after the Gators brought home three national titles during the collegiate season. The three championships came from the men’s outdoor track and field, baseball and women’s tennis teams.

The third-place finish marks Florida’s ninth consecutive top-five finish in the Learfield Sports Directors’ Cup standings. Points are awarded for the Learfield Sports Directors’ Cup based on finishes and participation in 20 NCAA Division I sports. Florida is the only program to finish in the top-10 in each of the last 34 national all-sports standings. This is also the ninth consecutive season the Gator athletics program has won a national title. The Gators have captured 18 championships since the 2008-2009 academic year. A total of 13 Florida athletic teams placed in the top-10 of their respective sport, one shy of the program record. Here’s the complete list of the teams that finished in the top-10.

Seven Gators combined to capture 13 NCAA individual titles and five Gators were named national athlete of the year in 2017.

“Our department was able to celebrate throughout this entire year because of the effort and competitiveness exhibited by Gator student-athletes and coaches. Having the opportunity to achieve at the highest level, against the very best competition, at one of the nation’s top public universities, is why people come to the University of Florida. As our fans often remind us, it’s great to be a Florida Gator.” -Florida AD Scott Stricklin

I'm an above-average golfer with surprisingly great touch around the greens. Click on my twitter link for some sports talk.
@Ry_McGinn
Previous Miami, Tampa Bay and Atlanta Braves All End Series With Losses
Next MLB All-Star Game Rosters Announced