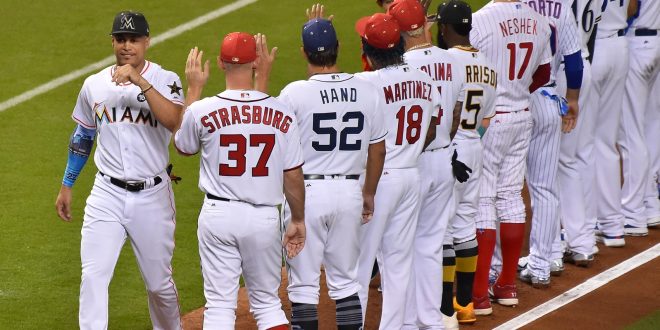 After hosting the MLB All-Star, Marlins look forward to the Rest of the Season

Miami became the epicenter of the baseball universe this past weekend. For the first time ever, the MLB All-Star Game took place at Marlins Park.

Former Gator, Jessica Blaylock, an in-house reporter for the Miami Marlins, was on Sportscene with Steve Russell and spoke about her experience down in Miami for the All-Star Game. Blaylock said not only were there a vast amount of Marlins fans down at Marlins Park, but also fans that represented all 30 teams in the MLB.

What’s to come for the Marlins

After a phenomenal weekend, Miami now looks forward to the second half of their season. Marlins went into the All-Star Game on a high note with a three-game win streak against the San Francisco Giants.

✔️ Game won
✔️ SWEEP complete
✔️ Ending on the first half on a high!#FishWin pic.twitter.com/wLvlEgbxOk

Baylock spoke about the team’s rough run in May, only winning 10 of the 28 games that month. However, when Baylock was asked if the team can make a run, she seemed optimistic in their ability.

“I definitely think they can make a run as long as their pitching can step up.”

Baylock continued to discuss how good pitching is critical for the success of the Marlins in the second half of the season. While the offense is doing a solid perfomance in most games, pitching has to come bail out the offense to lock in wins, Baylock says. However, she did applaud Dan Straily for being one of the most consistent in the starting rotation and Chris O’ Grady securing a win for the Marlins in his debut in San Francisco.

The Marlins have a strong chance of having a great second half of the season. Considering the standings of the other teams in the NL East, their biggest competition would be the Washington Nationals.

Baylock also said that she believes the Marlins will be active by the trade deadline. She says that relievers will be traded to help rebuild and strengthen the team.

Marlins begin the second half of their season Friday against the Los Angeles Dodgers down at Marlins Park. This will be the first of a three game series. Game time starts 7:10.