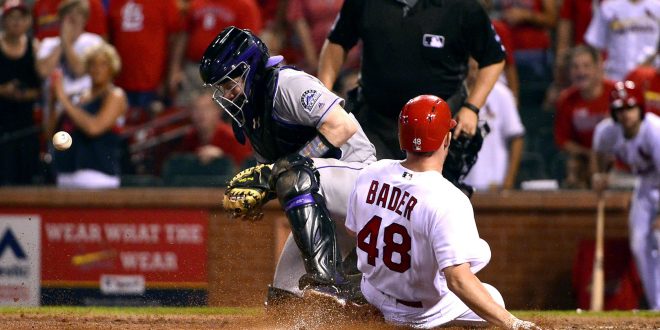 Could this be the year for Gator baseball and former Gator baseball players to succeed? Well, after grabbing their first national championship last month in Omaha, there’s no doubt 2017 is year for the Gator Baseball team. However, there is proof Florida’s success could rubbing off on their former players.

Yesterday afternoon, former Gator outfielder Harrrison Bader, was called up by the St. Louis Cardinals. Bader made his Major League debut as the Cardinals took on the Colorado Rockies. The former Gator replaced outfielder Dexter Fowler who was placed on the 10 day disabled list with a strained wrist.

Not only did Bader make his big league debut against Colorado, but he scored the winning run for the Cardinals in a 3-2 win.

The 2015 third-rounder started the day out in center field and was the seventh man up to bat. In his first three times at bat, he struck out and flied out. Then came the ninth-inning, the inning and moment the former Gator will never forget.

Up against Colorado’s pitcher Jake McGee and a 95 mile per hour fastball, he found a way to double down the left-field line. Greg Garcia sacrificed which moved Bader to third base. Jedd Gyroko then drove in the speedy Bader with the winning run.

The former Gator was in Memphis still on the Cardinals’ Triple A team yesterday morning and by night he was sliding across home plate, in the Major Leagues, securing a walk-off run over the Colorado Rockies.

At Florida, Bader was named to the All-Tournament Team in the 2015 College World Series. He was taken as the 100th pick in the 2015 MLB Draft and has been batting his way to the top ever since. This season, the former Gator was hitting .297 with 19 home runs and 48 RBIs in 97 games for Memphis.

Gators in the MLB

Harrison Bader makes the third former Gator to get called up this season.

Will this trend of good mojo for former Gator baseball players continue throughout the season? We have a few more months to find out.

A senior at the University of Florida reporting on Gator sports, local Gainesville and surrounding area sports, and telling the stories of local athletes. Born and raised in Gainesville, Florida with a passion for telling people's stories and having fun doing it.
@SportsDarwinism
Previous Tebow’s Baseball Journey
Next MLB: Rays Defeat Orioles To Take Series