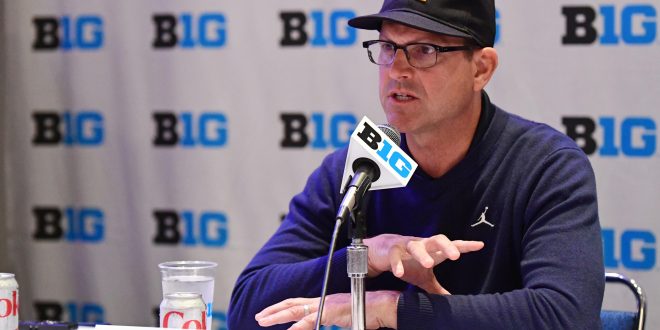 QB Competitions Heating Up for Florida and Michigan

Most Gator football fans know there is a quarterback battle going on to see who will open the season as the starter when Florida plays Big 10 foe Michigan.   But Michigan apparently has a quarterback starting battle going on as well even though last year’s starter returns this season.   Michigan coach Jim Harbaugh discusses that competition but not before dressing as Jim Harbaugh does as he takes part in the head coach photo at Big 10 Media Days.

Harbaugh says incumbent starter Wilton Speight is tied for the lead at the position with senior John O’Korn and freshman Brandon Peters.  This contradicts what Harbaugh said earlier this spring about Speight leading the depth chart.

Quarterback competitions at both Florida and Michigan have created a compelling narrative for the 2017 Cowboys Classic. Florida and Michigan open up their 2017 campaigns in AT&T Stadium on September 2. Neither Harbaugh’s squad nor McElwain’s have announced a starting QB.

Wilton Speight’s 2016 performance was a roller coaster. He started out last season well and ended up completing 64 percent of his passes.  He even had a breakout game against Maryland, where he set the record for most first half passing yards in school history (292 yards). Speight wasn’t lighting the world on fire in 2016, but he was surrounded by a talented offense, and even made some big plays in crunch time. Big plays like a 46-yard-game-winning TD against No. 8 Wisconsin in Week 5.

Fast forward to November 12, 2016. Michigan was ranked #2 in the country and looking to continue their nine game win-streak heading a match up with the 5-4 Iowa Hawkeyes. Late in the fourth quarter, Michigan had possession on Iowa’s side of the field. Another Wolverine touchdown would have put the game out of reach for Iowa, and kept Michigan’s hope of a College Football Playoff birth alive.

All that changed when Speight went down with a shoulder injury after a huge hit. He didn’t start the next week against Indiana. O’Korn made the start and got the “W”, despite his ugly game in the snow.

Wilton Speight would come back to make the start in Michigan’s final game of the regular season against Ohio State.  He played decently, throwing a five yard touchdown pass in the first half of overtime on fourth down to keep the game alive, but it just wasn’t enough.  And, the Wolverines would lose their Orange Bowl match up to FSU, yet again in dramatic fashion.

If Michigan does not go with Speight, O’Korn has experience and Peters may have the best upside of any of the trio.  O’Korn won AAC Freshman of the Year after replacing David Pilland when he played at Houston.  O’Korn transferred from Houston after losing the starting job in his second season.

Brandon Peters is a very intriguing prospect. He redshirted last season, but the #3 QB recruit of 2016 is in a “dead heat” with the older guys.

Harbaugh believes that competition breeds tough, competitive football players, so its not surprising he hasn’t named Wilton Speight the starter. It’s a promise he makes to recruits all the time – the best player plays.