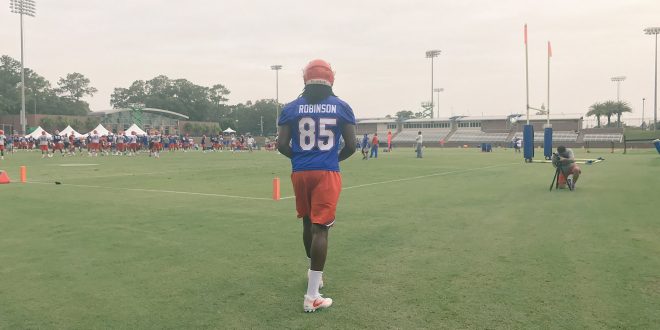 James Robinson is officially a Florida Gator via @GatorsFB

After a crazy recruiting process involving James Robinson and Florida, the coaching staff finally secured his spot on the roster for the 2017 season.

Robinson was cited for possession of marijuana during a visit to Ohio State and the probability of getting him to Florida was low due to poor grades in high school.

But here he is.

This week is the first time we have seen the late addition to the team.

The first thing you see about this wide receiver is his size.

James Robinson is listed at 6’4″ and weighs 205lbs. That’s not very small for a freshman entering his first college practice.  After practice, Gator coach Jim McElwain addressed Robinson’s role in the offense in the upcoming season. The answer was phenomenal…“he’s big, that helps.”

The size of an outside wide receiver helps with mismatches on smaller corners and makes the defensive secondary worry about jump balls in the air, especially in the red zone.  However, Robinson won’t be considered a starter right away as there are some challenges he’ll have to overcome.

For one thing, the wide receivers group is loaded with players as sophomores Tyrie Cleveland and Freddie Swain who look to see significantly more playing time with junior Antonio Callaway anchoring the unit.  The other obstacle is Robinson’s late arrival. Coach McElwain touched on the fact that missing spring and summer practices was a big negative.

This has been his first taste of practice with the team and the first time actually running routes to the plays being called. There’s a lot of work still to be done before we might see this 4-star high school recruit blossom into a high profile college football player.

Originally from Ocala, Florida. University of Florida Class of 2017. Avid FIFA player willing to beat anybody. Follow me on Twitter for everything you need to know!
@JoshLaSelva
Previous Former Gator Marcus Maye Adjusting to NFL
Next Fall Camp Week 2: Offensive Line Has Impressed