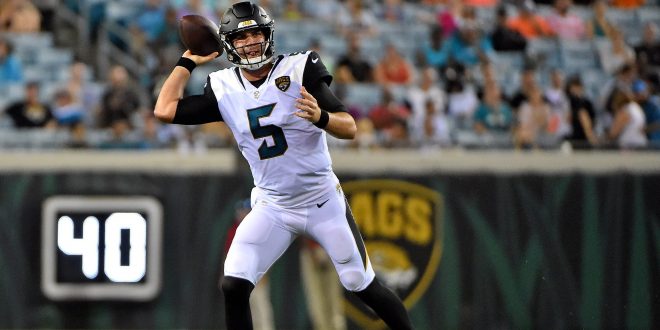 Jacksonville Still in Limbo at the Quarterback Position

After starting back up quarterback Chad Henne, the Jacksonville Jaguars still could not come out on top last night. The Jags lost a close contest to the Carolina Panthers 23-24. Bortles began to struggle towards the end of last season and has been inconsistent ever since.

Battle of the QB’s

Just a few weeks before the kick off of the 2017 NFL season, Jaguars head coach Doug Marrone decided to give back up quarterback, Chad Henne a try in place of Blake Bortles. Struggling to be consistent, Bortles has opened up a quarterback competition with the season just right around the corner. After last night’s loss, Marrone said that he could not comment on Bortles or Henne until watching film. He also said that he was not pleased with the offense as a whole.

Despite being benched against the Panthers, Blake Bortles showed hope when he got into the game. He throw for 125 yards, one touchdown and one interception. A large improvement from last weeks mere 65 yards passing. After the game Blake Bortles said that regardless of the status of his position being unknown, he intends to continue to work hard in practice.

And to make the decision more complicated for Marrone, Henne finished the game throwing for just 73 yards. He said that he and Bortles will know once the coaches make their decision, but until then he will also continue to fight for job.

While star wide receivers Marqise Lee and Rashad Greene sat out last night, there was still a strong presence from the  position. 5″6 wide receiver Shane Wynn had a nice grab in the end zone in the fourth quarter for a touchdown to tie the game. Whoever Marrone decides to start at quarterback, he will have multiple options between Lee, Greene, and Fournette and possibly even Wynn heading into the regular season.

The Jaguars will play their last preseason game next Thursday against the Atlanta Falcons.