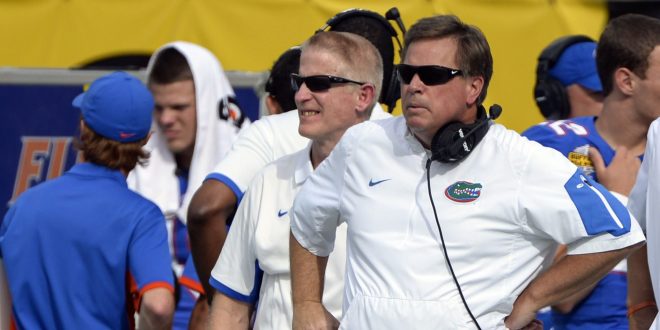 Gators Physicality Could Play Huge in Matchup with Michigan

Last time the Florida Gators and Michigan Wolverines matched up on the football field, Michigan dominated Florida 41-7 in the 2016 Buffalo Wild Wings Citrus Bowl. Following the game, Gators head coach Jim McElwain expressed his disappointment in his team’s lack of physicality in the loss. A year and a half later, Gator head coach Jim McElwain understands how important the team’s physicality will be in Saturday’s rematch against Michigan.

Time for O-Line to Prove it

The desire for physical play isn’t exclusively for the offensive line. Michigan head coach Jim Harbaugh has established the old school Michigan philosophy of pounding the football. The Gator front seven on the defensive side, specifically sophomore linebacker David Reese, understands that the defense has to be more physical in order to stop the Michigan running attack. What bodes well for the Gators is the inexperience on the offensive line for Michigan. Michigan only returns two starters on the offensive line, mainly on the left side. In total, Michigan is only starting potentially four returning starters. Florida should feel confident in the defense’s ability and experience to overpower a young Michigan front and slowing down the running attack.

Physicality Could Be The Difference

Michigan and Florida build their teams in very similar ways. Both teams want to establish a strong running game offensively. On the defensive side, both the Wolverines and Gators want to put opponents in uncomfortable situations on third down. The winner of this game might come down to who plays the most physical on the line of scrimmage. The Gators are ready to return some of the hits they received in Orlando when the two meet in Dallas on Saturday.