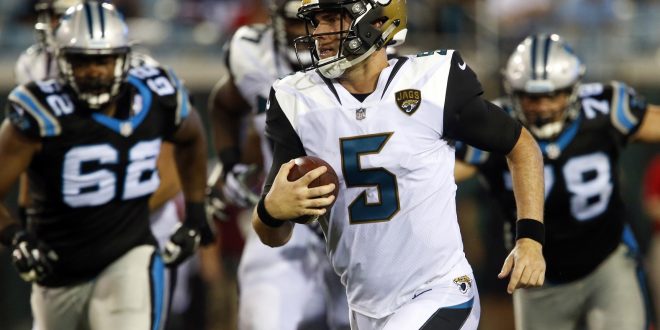 Aug 24, 2017; Jacksonville, FL, USA; Jacksonville Jaguars quarterback Blake Bortles (5) runs the ball during the second half of an NFL football game against the Carolina Panthers at EverBank Field.

Week 4 of the NFL Preseason begins Thursday night as 30 teams will be playing on the same day.

With the 2017 regular season beginning next Thursday, teams are not expected to play many starters. However, players are still making a push to fill the final roster spots.

After just recently naming Blake Bortles their starting quarterback, the Jacksonville Jaguars will be playing the Atlanta Falcons in their final preseason matchup. The game will be taking place in the brand new Mercedez-Benz Stadium. It has been an up and down preseason for the Jaguars to say the least. Bortles job was in jeopardy after he struggled in the first two preseason games. As a result, the Jaguars started back-up quarterback Chad Henne in week 3.

One of the reasons why Bortles was able to beat out Henne was because of his mobility. It is well known that Jacksonville’s offensive line is a liability, so Bortles ability to scramble gave him the edge. For the Jaguars, now is the time to look ahead and forget about the QB battle. Jacksonville head coach Doug Marrone has said that Bortles has looked the best he has ever seen during the time he’s been with the Jaguars. It is unclear whether or not the Jaguars will play their starters against the Falcons on Thursday night.

The Miami Dolphins will be heading to Minnesota in preparation for their season opener against the Tampa Bay Buccaneers on September 11th. The 2017 preseason started off rocky for the fins but the team actually has a lot to feel good about heading into the season. After starting quarterback Ryan Tannehill went down with a season ending knee injury in practice, Miami signed Jay Cutler. Although a short sample, Cutler has played solid in the preseason. Cutler finished completing 7 of 12 passes with a touchdown and a lost fumble.

Even though Miami may have their quarterback situation figured out, there is still work to do. The Dolphins secondary has been everything but good this preseason as they have given up 30 points a game in the first three games. The Philadelphia Eagles quarterbacks had their way with the Miami secondary as they passed for 274 yards and three touchdowns last Thursday. The Dolphins will look to show a better defensive effort before they have to face Jameis Winston and the Buccaneers’ offense in the season opener.

The Tampa Bay Buccaneers are heading into the 2017 regular season with theirs eyes set on the postseason. The Bucs have been the reality TV stars of the NFL as the focus of this year’s Hard Knocks series. If Tampa wants to compete for a playoff spot this season it needs to begin on the defensive end. The Buccaneers pass rush has been a question mark so far this preseason. Tampa Bay only has six sacks this postseason, half of them coming from linebackers. The Bucs defense is looking to get back to their 2016 ways as they had eight sacks in a single preseason game against the Browns.

To go along with Tampa’s pass rush struggles, they also seem to have a hard time in the red zone. Buccaneers head coach Dirk Koetter is on record saying that one of the team’s goals is to be 60 percent in the red zone. That has not been the case so far in 2017. So far, Tampa Bay is 2 of 7 in the red zone (28.5%). The offense in general is not a problem for the Bucs as they are averaging 346 yards per game. Their red zone issues, however, have put them at 28th in the league in scoring with 12 points per game.

Rest of the league prepares for Week 1

The Carolina Panthers are looking to have a bounce back year after a disappointing 2016. The Panthers face a big question when it comes to quarterback Cam Newton’s health. Newton, who is coming off a torn rotator cuff surgery, is unlikely to play in the preseason finale against the Steelers. Head Coach Ron Rivera says that the team will not know if Newton will be available until the season opener.

The defending Super Bowl champions have been busy as of late as they head into their final preseason game against the New York Giants. Over the last week, New England saw top wide receiver Julian Edelman go down with a season ending injury and traded a 7th round pick for Marquis Flowers. Even though the trade isn’t the biggest of headlines, it was a big move. The Patriots have sustained multiple injuries to members of their special teams unit.

Earlier this week, Detroit Lions quarterback Matthew Stafford set a new precedent in the league when he signed a five-year 135 million dollar extension. With the new deal, Stafford became the highest paid player in NFL history. Ahead of the Lions last preseason game against the Buffalo Bills, Stafford said that great things lie ahead for the organization.