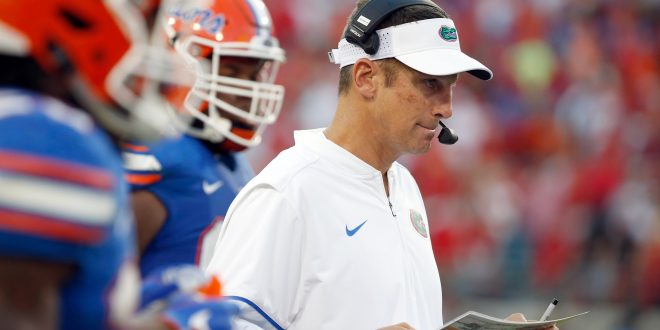 McElwain Moves Offensive Coordinator Up to the Booth

In just three short weeks of the season, there’s already been a lot of heat around the Florida football program. More specifically, spectators and fans want to know what is going on with this Gator offense. With Jim McElwain in his third season as head coach, a lot of folks are looking past Coach Mac and straight to the offensive coordinator.

Jim McElwain hired Nussmeier back in 2015 and he’s been calling the plays ever since. Florida fans and the Gator offense have been going through some growing pains since quarterback Tim Tebow left Gainesville. At this point, fans just want a productive offense with a quarterback who can take control. It’s the start of year three for McElwain and year two for Nussmeier, and fans have high expectations for growth.

The season-opener against Michigan was a chance for the offense to showcase that growth. Instead, the offense didn’t score a single touchdown.

Nussmeier is going up, not out–Not yet.

In the last two seasons, the offensive coordinator’s offenses have finished ranked 116th and 111th nationally.

During Wednesday’s SEC Teleconference, McElwain informed the media his decision to move Nussmeier back up to the booth. McElwain also made it known that he is not taking over the play-calling, just yet.

Florida will test out this minor change on Saturday as they host SEC rival Tennessee, for a home-opener and conference opener. The Gators are looking to avoid going 0-2 for the first time since 1971.

A senior at the University of Florida reporting on Gator sports, local Gainesville and surrounding area sports, and telling the stories of local athletes. Born and raised in Gainesville, Florida with a passion for telling people's stories and having fun doing it.
@SportsDarwinism
Previous College Football Preview: Kansas State at Vanderbilt
Next College Football Preview: Alabama vs Colorado State