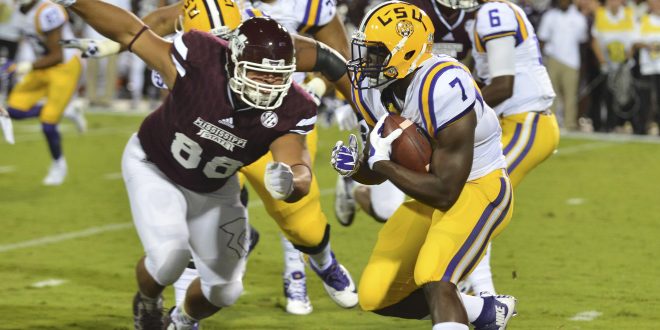 LSU and Mississippi State are two teams that are holding up the reputation of the SEC West. Both have started the season 2-0 against non-conference teams going into their matchup this weekend.  So far this season, Mississippi State has beaten Charleston Southern University 49-0 and Louisiana Tech 57-21. LSU is ranked 12th, and has topped BYU 27-0 and Chattanooga 45-10 this season. Last year LSU won the close battle against Mississippi State 23-20. This Saturday the two teams will open up the all-anticipated SEC play in Starkville, Mississippi.

Mississippi States Head Coach Dan Mullen has been turning junior quarterback Nick Fitzgerald into a tough player. Fitzgerald will need to be, as the  Bulldogs are going up against a one of the most feared defenses in college football. In an interview Mullen expressed just how difficult its going to be facing a defense that has so much talent. Mullen also said it’s going to come down to having a good game plan and his players having confidence.

The man everyone will have an eye on will be this week will be, SEC Defensive Player of the Week, Jeffery Simmons. In an interview Mullen expressed how the sophomore has such a good work ethic and is a true leader on the DL.

One of the standout players from the 2016 season, junior wide receiver Malik Dear, is still questionable after tearing his ACL in spring practices. Mullen said Wednesday that Dear has started practicing with the team, but is most likely not going to see any playing time Saturday.

LSU’s Head Coach Ed Oregeron knows his defensive is going to have to be on their game this Saturday, because of how accurate Miss St. QB, Nick Fitzgerald is at throwing. He also sees similarities in Fitzgerald and LSU QB Danny Etling. Orgeron noted that they both run their offense very well.

LSU Players to Look For

After stepping away from football, junior linebacker, Arden Key will be back on the field this Saturday. Coach Orgeron says Key should start the game, but he will use back up K’Lavon Chaisson. Since Key is a little rusty.

Check out this interview with @DJChark82 previewing the Mississippi State game on Saturday morning on @CollegeGameDay. pic.twitter.com/II9wMNY2Co

Also tearing it up is junior running back, Derrius Guice. Who last week against Chattanooga surpassed the 2,000 consecutive rushing yards mark in his college career, with 2,047 yards. The junior only needed 271 attempts to reach the goal of 2,000 which is the fewest of any player in LSU history. So far he has 224 receiving yards and and four TDs.