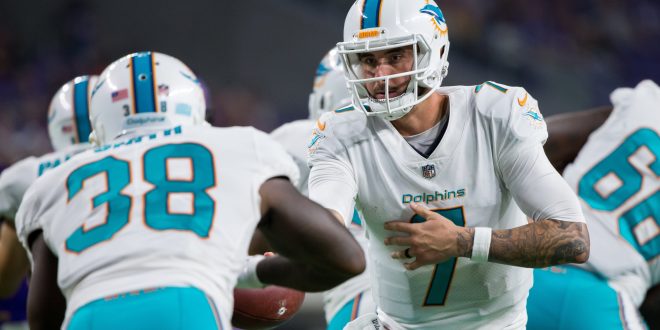 Finally, the Miami Dolphins are starting their NFL season after Hurricane Irma cancelled their first match up. The eight months of waiting and an extra seven days of anticipation is finally over.

On Sunday, the Miami Dolphins will take on the Los Angeles Chargers in Carson, California. Starting their 16-week journey with 22 new players, a brand new quarterback, defensive coordinator, and even new tight ends. All in hopes for another playoff run. Preseason showed that new Dolphins team is a stronger and a more competitive team than last year’s squad.

The Dolphins team, coaches, staff and their families evacuated Miami last Friday and have been practicing in Oxnard, California this whole week to prepare for the season opener. Quarterback Jay Cuter said the evacuation helped the team stay focused on football during the hurricane.

Stephen Ross is flying players, coaches, staff & their families to LA ahead of Irma.

Our thoughts & prayers are with everyone in Florida. pic.twitter.com/IlIEyOKA7f

Stephen Ross, the Miami Dolphins owner, pledged $1 million to the AARP Foundations Miami Dolphins Hurricane Irma Relief fund to help rebuilding and recovery efforts across the state of Florida. Ross said, “Our most heartfelt thoughts and prayers go out to those impacted by Hurricane Irma and we are committed to helping in long term recovery efforts.”

Stephen Ross has pledged $1 Million to long-term rebuild and recovery efforts in the aftermath of Hurricane Irma. https://t.co/4Q8kdFvDw5

The Match Up: Dolphins

The Dolphins and the Chargers are not divisional rivals, but have played each other in the last four seasons. The Dolphins have three wins against the Chargers in that time span and hope to make it four on Sunday.

After the Miami Dolphins lost quarterback Ryan Tannehill, former Chicago Bear Jay Cutler came out of retirement to join the Dolphins and his former offensive coordinator, Dolphins head coach Adam Gase, in August. Most teams could not overcome a loss of the starting quarterback but the team has truly evolved around Cutler’s style.  The main question is if Cutler can prove his value to the offense like Tannehill did before his injury.

If Cutler uses his dangerous trio of receivers consistingJarvis Landry, DeVante Parker, and Kenny Stills, the team will .

"Every day is a new challenge and every day is exciting and I’m just enjoying it.”https://t.co/iPnlRnFpdI

The Chargers lost many close games last year and their rankings were near the bottom of the league. This season the Chargers started an uneven preseason with only one win over the Los Angeles Rams. Now, the Chargers (0-1)  are seeking their first win after losing to the Broncos 24- 21, after their game tying field goal attempt was blocked. No matter where they call home- the Chargers were in San Diego for 56 years- the team is still unable to win close games.

Cutler says the team will have their hands full, “it’s a good defense. The front seven is good. The secondary is talented.”

The Chargers’ L.A. opener and the start to the Dolphins season starts at 4:05 on Sunday, September 16.

Hello my name is Kaitlin Alexander, a passionate story teller and lover of sports. Fun facts about me: I am a world traveler, interviewed all three UF Heisman Trophy winners, and a former intern of Bleacher Report. Follow me on Twitter: KalexanderUF
@KalexanderUF
Previous NFL Preview: Week 2 Key Matchups
Next Gator Volleyball KicksOff Weekend Tournament With Two Wins