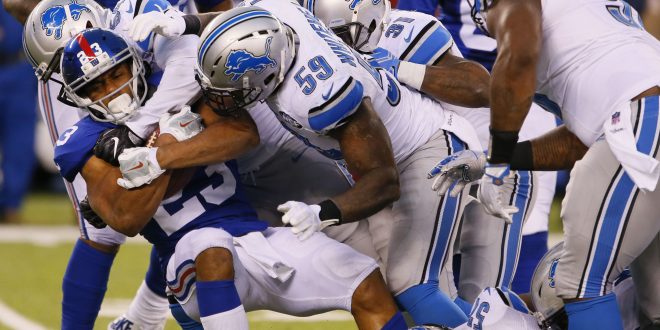 The New York Giants will open their 2017 home opener tonight as they host the Detroit Lions for Monday Night Football at MetLife Stadium. The Giants are heading into tonight’s game hoping for their first win of the season, while the Lions are looking to stay undefeated.

The 2007 SBXLII champions will be honored at halftime of MNF! Watch the live stream on our Facebook page!

The Giants Look to Bounce Back

After a 19-3 loss against the Dallas Cowboys in Week 1, the Giants are expecting a better performance this week, especially on the offense. New York managed just 13 first downs and 233 total yards against Dallas’ defense. However, Giant’s quarterback Eli Manning is not worried about last week’s performance. He says it’s just the start of the season and the team will bounce back.

New York is taking on Detroit a week after playing Dallas for the second year in a row. The Giants have won four of their past five games against Detroit including last year’s 17-6 win. Will the Giants be able to continue their winning streak against the Lions? The Giants offense is relatively new this season with Paul Perkins moving up to starting running back, and with the additions of tight ends Rhett Ellison and Evan Engram, and receiver Brandon Marshall.

The biggest set back for the Giants offense is wide receiver Odell Beckham Jr.’s ankle injury. Beckham still remains questionable for Monday Night’s game. His appearance will make a big difference in the Giant’s performance.

The Lions Hope to Stay Undefeated

Detroit is coming off a 35-23 home win against the Arizona Cardinals. Lions quarterback Mathew Stafford‘s performance during Week 1 led to their win. Stafford had 4 touchdowns, 292 yards, and only 1 interception. With the help of Stafford, Detroit came back after a 17-9 third-quarter deficit to score 19 points. Stafford says it’s great to start to the season.

Detroit’s defense will be key to their performance tonight against New York’s uneasy offense. The Giant’s should be on the look out for cornerback Jamal Agnew, defensive end Jeremiah Ledbetter and former Gators Teez Tabor and Jarrod Davis.

Sydney is a senior studying telecommunications with a specialization in sports media at the University of Florida. She is a multimedia sports reporter for ESPN 98.1 FM/850 AM WRUF and WUFT-TV.
Previous Tampa Bay Bucs Show Out in Opener Against Chicago Bears
Next MLB Playoff race update