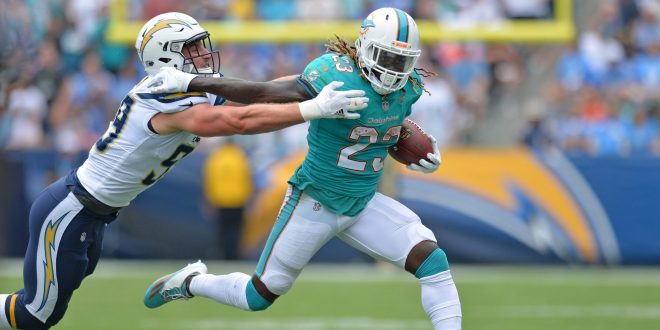 The Miami Dolphins (1-0) come to MetLife Stadium to face the New York Jets (0-2) for their first divisional game of the year. The game is for 1:00 ET on CBS.

When the Dolphins were not able to play Week 1 of the season due to Hurricane Irma, many wondered if they would start the season rusty. This thought was quickly put to bed as the Dolphins came out strong on both sides of the ball.

The running game, led by 3rd year Running Back Jay Ajayi, was a massive difference for the entire team. Ajayi was given the ball 28 times for 122 yards and was thrown the ball two more times.

The running game was crucial for Jay Cutler’s success during his first game with the team. Cutler said in a recent interview that he is enjoying this win and that this locker room seems special.

Cutler surprised some with a 230-yard game and a touchdown. The touchdown was a throw on the run to Kenny Stills early in the third quarter. If nothing else, Cutler showed everyone during this game that his arm strength has not faded.

Even though they had a good day, the offense struggled in the red zone. The offense was in the redzone three times but only came away with field goals. This will be an area of improvement for this coming week against a capable Jets defense.

On defense, the secondary had a rough day trying to stop Philip Rivers as he threw for 331 yards and a touchdown and only sacked Rivers once. They will need to improve with getting off blocks in the future.

Earlier in the week, Adam Gase said he is looking forward to the divisional game against the Jets and says that it will be a slugfest.

Jets Play for Their First Win

Jets fans came into the 2017 season with low expectations but hoped that they would be pleasantly surprised. Going into Week 3, they have not been. The Jets have lost both of their games so far, losing last game by 25 against the Raiders. With the defense looking to be the strength of the team, Head Coach Todd Bowles was not thrilled with how they performed in Week 2.

The defense conceded three touchdowns to red zone threat Michael Crabtree while also allowing three touchdowns on the ground as well. They will not catch a break this week as they face a work-horse back like Ajayi.

Offensively, the Jets hoped to do well against a weaker Raider defense but could not take advantage until the game was out of hand.

Despite the woeful loss, the Jets younger core looked to show potential. Rookies Marcus Maye and Jamal Adams combined for 11 tackles and did well for most of the game.

In the Week 3 match up against the Dolphins, Jets fans look for a glimmer of hope.