The Florida Gators Cross Country team will be hosting the 29th Mountain Dew Invitational this Saturday at the Mark Bostick Golf Course. The Gators are coming off a successful meet at the UNF invitational. This Saturday will be the Gators second meet of the season and their only meet at home.

Florida started their season at the UNF Invitational back on September 7th. The Gators finished with nine top-10 finishes between both the men and the women. The women had five while the men had four.

In the 5k race two of the Gator women, sophomore Emily Chapman and sophomore Autumn Bartlett recorded personal bests. The Gator Women ended the dual meet with two first place finishes. They put up 15 points against UNF and 24 points against Jacksonville.

On the other hand, in the 5k race for the men the Gators beat Jacksonville by 15 points, but lost to UNF by 39 points.

There will be 32 teams competing in Saturday’s meet. A few notable colleges competing Saturday are FIU, Florida A & M, UCF, Florida Gulf Coast, Florida State and Miami. This will be the only meet the Gators will have at home this season.

The women will be competing in the 5k, while the men will be racing in their first 8k of the year. Having both previously ran 5k’s in the UNF Invitational.

Thank you #Gatornation for another successful night of collecting items for those impacted by Hurricane Irma. #GatorGood pic.twitter.com/zYy3PWUfVJ

On the men’s side, in the UNF Invitational Marshall Dillon finished in fifth place with a time of 15:51.41. The redshirt freshmen also had the fastest time in the meet for the Gators.

After the Mountain Dew Invitational, the Gators will finish the regular season at the Florida State Invitational on October 6th. Later they will compete in the SEC Championships on October 27th.

Follow me on Twitter @SarahCarlieUF or Instagram @sarahcarlie
@SarahCarlieUF
Previous NFL Preview: Jets Welcome Dolphins for Divisional Match-Up
Next The SEC Showdown for the Top Dog 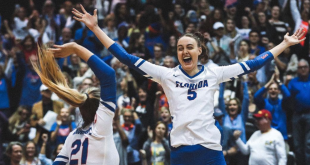