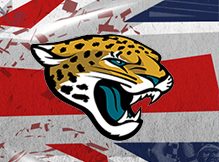 The Jacksonville Jaguars are finally starting to feel at home at Wembley Stadium, dominating the Baltimore Ravens 44-7 in the London morning game.  The Jags continue their success in London as the win marks their third consecutive victory in The Big Smoke.

Blake Bortles was stellar for the Jaguars, posting a 20 of 31 line for 244 yards and 4 touchdowns.  Jacksonville’s defense showed up equally as strong, forcing three turnovers.

The Jaguars posted 410 total yards on a stout Ravens’ defense that had held opponents to an average of 5 points per game in their previous two contests.

Marcedes Lewis led the charge through the air, catching four passes for 62 yards and three touchdowns.

The presence of Leonard Fournette lurking in the Jacksonville backfield helped to open up throwing lanes for Bortles.  The Ravens were able to contain Fournette, holding the rookie sensation to 59 yards and a touchdown on 17 carries.  He also caught three passes for 21 yards.  Fournette became the first Jaguars player to rush for a touchdown in each of his first three games.

The Ravens had zero remnants of a passing attack as the Jags held the Ravens’ QB Joe Flacco to a mere eight completions for a career-low 28 yards.  Flacco’s timing was off with his receivers, as he was either too high, low or late on nearly every pass.  Flacco was pulled for Ryan Mallett in the fourth quarter of the drubbing.

Safety A.J. Bouye and defensive back Jalen Ramsey both recorded interceptions as the Jaguars stole the momentum throughout the contest.