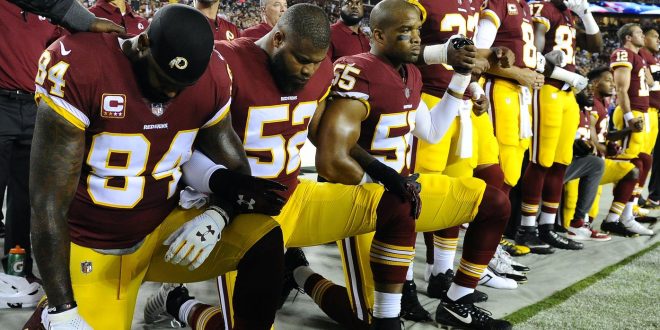 The national anthem eulogizes the history and tradition of the United States. At every professional sporting event, people from each branch of the military are honored during the national anthem while everyone stands to show their respect. Last year, San Francisco 49ers quarterback Colin Kaepernick decided to kneel instead of stand, mainly to protest oppression against minorities. This caused much controversy, but most players continued to stand, despite the opportunity to become a prominent figure in the country. Now, approximately 13 months after Kaepernick first took a knee, the entire country is divided on the issue. However, one thing is certain: the NFL world has created unity, regardless of a player’s stance on the issue.

President Donald Trump decided to voice his opinion on this controversial issue. He publicly called out NFL Commissioner Roger Goodell and the NFL owners by not taking a stand against players who kneel or sit instead of stand. “Wouldn’t you love to see one of these NFL owners, when somebody disrespects our flag, to say, ‘Get that son of a b—- off the field right now. Out. He’s fired. He’s fired!'”

The current President made this comment during a political rally in Alabama, and proceeded to make more comments about this matter.

Trump attributed the massive drop in NFL ratings to the country being more interested in what’s going on with him. Along with this, he implied in a tweet that this drop in ratings can also be attributed to this controversial issue.

…NFL attendance and ratings are WAY DOWN. Boring games yes, but many stay away because they love our country. League should back U.S.

President Trump continued with a barrage of tweets regarding this issue.

Sports fans should never condone players that do not stand proud for their National Anthem or their Country. NFL should change policy!

Roger Goodell of NFL just put out a statement trying to justify the total disrespect certain players show to our country.Tell them to stand!

If NFL fans refuse to go to games until players stop disrespecting our Flag & Country, you will see change take place fast. Fire or suspend!

Response Around the League

Instead of calling out Trump or acknowledging anything specific he said, NFL Commissioner Roger Goodell responded to the President’s comments with positivity and unity.

Many prominent players have decided to articulate their opinion in response to Trump.

New England Patriots quarterback Tom Brady disagrees with Trump’s stance, saying that everyone has the right to express themselves freely.

Denver Broncos linebacker Von Miller thinks that Trump’s comments are an assault on an individual’s freedom of speech.

Buffalo Bills running back LeSean McCoy pointed out that Trump should be the one uniting our country, not getting “angry and upset” about a peaceful protest.

McCoy did acknowledge that the American flag and national anthem mean a lot to him. However, the star running was seen actively stretching during the anthem, which many people viewed as more disrespectful than simply kneeling or sitting.