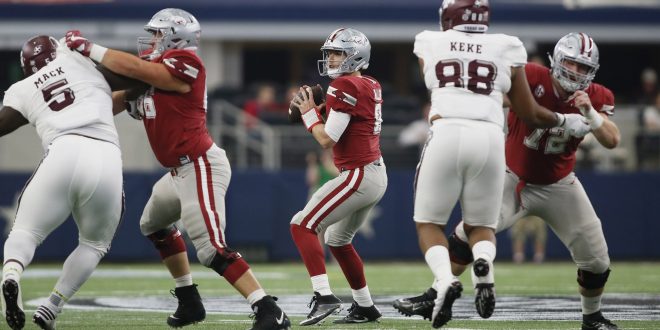 The Arkansas Razorbacks (1-2, 0-1 SEC) return home following a 50-43 overtime loss to the Texas A&M Aggies in Dallas last weekend. On Saturday, they’ll face another Aggies team looking to add on a third win. On Saturday, the Razorbacks will host the New Mexico State Aggies (2-2, 0-1 Sun Belt) at noon. Arkansas and New Mexico State last faced each other back in 2004, and the Razorbacks handily defeated the Aggies 63-13 on home turf.

Arkansas currently sits in last place in the SEC West standings and losses to Texas A&M (won sixth straight vs. Arkansas) and ranked TCU don’t help its cause. The Razorbacks’ only win this season came against FCS opponent Florida A&M Rattlers in a 49-7 victory. With a potential 1-3 start to the season on the line, Arkansas is set for an important home matchup. The Razorbacks enter as 17-point favorites going into this game.

In their overtime loss to Texas A&M, the Razorbacks’ defense allowed six touchdowns and 501 total yards against the Aggies. They also surrendered the lead several times, including midway through the 3rd quarter when the Aggies took a 24-21 lead off a Keith Ford touchdown run. Arkansas head coach Bret Bielema said his unit made several mental errors during that game, and they’ll look to improve against New Mexico State.

Looking at the box score, both Arkansas and Texas A&M played an evenly fought game. Overtime was ultimately needed to decide the final score, but Arkansas allowed 231 yards through the air and gave up an average of 8.6 yards per pass. This weekend, they’re facing the ninth-ranked passing offense in the nation.

Well, that was crazy.

Texas A&M beats Arkansas 50-43 in overtime. What a game. pic.twitter.com/0lRfhna2aM

The Razorbacks offense allowed six sacks and eight hurries against the Aggies, and Bielema said a point of emphasis this weekend will be to protect quarterback Austin Allen or whomever is receiving snaps. New Mexico State is tied for 18th in the NCAA in sacks with 12 and averages three per game this season. On the flip side, Arkansas is nearly last in the country in sacks allowed with 11 through three games.

Preparing for the Aggies

New Mexico State quarterback Tyler Rogers is third in the country in passing yards with 1,413 through four games. That passing yardage total is ahead of notable passers like Lamar Jackson, Baker Mayfield and Sam Darnold. Rogers has 12 passing touchdowns and four interceptions, completed 65.3 percent of his passes, and a 139.7 passer rating. Bielema spoke about Rogers and the weapons he has to work with on offense, which includes senior running back Larry Rose III. Rose has three touchdowns and is averaging 5.9 yards per carry and 7.5 receiving yards per game this season.

With the home crowd behind them, the Razorbacks will look to extend their five-game win streak against the Aggies. Kickoff in Fayetteville is set for noon ET on the SEC Network.

Urban Meyer is a household name to college football fans. The father of three served …