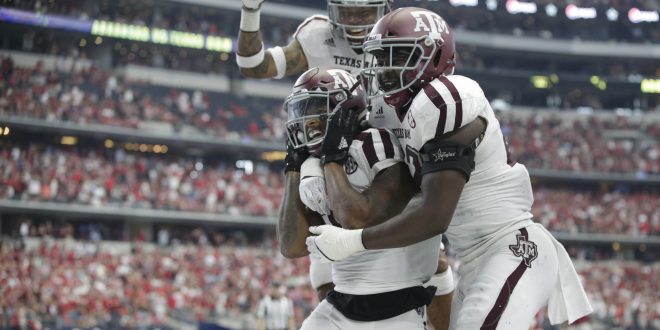 South Carolina and Texas A&M will have a strong match up on Saturday. Both teams are continuing to get better, but the Gamecocks and Aggies have to overcome their struggles.

The Gamecocks have been improving since game one, but injuries have become a road block for the team.

Big time wide receiver Deebo Samuel didn’t play last game and will not play this game.  His injury time is up in the air and head coach Will Muschamp wants him to be completely healthy before returning.

Linebacker Bryson Allen-Williams is out for the rest of the season due to a shoulder injury.  He had surgery on Wednesday morning.

Coach Muschamp doesn’t want the injuries to affect the way the team practices during the week.

Sophomore Jake Bentley has stepped up in the quarterback position for the Gamecocks.

For the season, he has thrown seven touchdowns and completed 1001 yards. The improvement Bentley has shown this season scares Texas A&M head coach Kevin Sumlin.

The Gamecock defense has been working hard this past week to make sure they don’t give up big plays.

The Aggies are prepared for a fight on Saturday.  South Carolina was a struggle for the team last year.

Sumlin knows South Carolina’s defense will be tough and they will not defeat themselves.

Texas A&M is 3-1 for the season and started SEC play with a nail biting win over Arkansas. With the momentum from that win, the Aggies are ready for another tough SEC opponent.

Coach Sumlin wants his team to continue the same practice routine so they are ready for Saturday.

Kickoff is set for 6:30 p.m. and can be watched on the SEC Network.

Nicolette is a senior at the University of Florida who has participated and enjoys reporting on all things related to sports.
Previous College Football Preview: Arkansas hosts New Mexico State
Next High School Football Preview: Gainesville at Forest