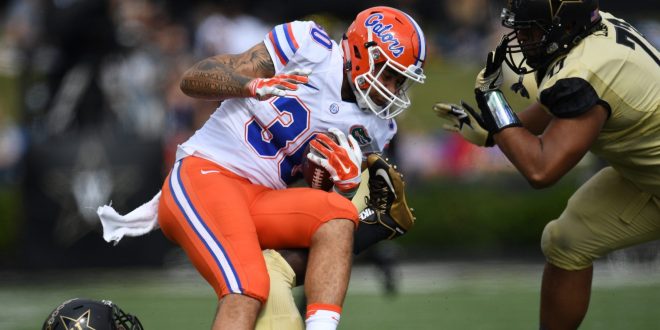 The Luke Del Rio era is back for the Gator football team. The first game of the second Del Rio era will come against a reeling Vanderbilt team. The Commodores are coming off a 59-0 annihilation at the hands of Alabama. A loss for either team on Saturday would make them take a big step back in the SEC East race.

After coming to the rescue in the Gators 28-27 win over Kentucky, Jim McElwain announced Del Rio will start the game at quarterback against the Commodores. Del Rio entered the game in the third quarter, and while he wasn’t spectacular (9-for-14 for 74 yards) he overcame his interception by bringing a stable presence to the offense and throwing the game winning touchdown pass to Freddie Swain. McElwain praised the redshirt-junior’s preparation after recovering from his injuries that ended his season last year.

In that same Kentucky game, freshmen Malik Davis and Kadarius Toney continued to make their names as playmakers in the offense. Davis led the team in rushing, rushing for 93 yards on 21 carries, with an important chunk of them coming in the 4th quarter comeback. Toney meanwhile was electric, scoring on a 36-yard rush from the Wildcat formation, and completing a 50-yard pass to Tyrie Cleveland to jumpstart one of the scoring drives.

Expect to see those two playmakers, along with Cleveland, get plenty of touches of against Vanderbilt. Toney and Davis may see extra time in the run game, as Vandy is coming off allowing a staggering 496 rush yards to Alabama, and rank next-to-last in the SEC in rush yards allowed, giving up 201 yards on the ground per game.

Defensively, the main focus for Florida is wrapping up the ball carrier. While that may seem like a simple task, it’s a subject Florida’s coaching staff has now been hammering home for multiple weeks. Why? Simply, the team hasn’t tackled well. While the team has had success making stops in the backfield, as they lead the SEC in sacks (3.33 per game) and rank second in tackles for loss (7.7), they’ve struggled to make tackles in the open field.

It’s something they will need to improve on as they face Ralph Webb and company on Saturday, as McElwain said it’s all about “the want to do it right”.

The Commodores are looking to shake off anything lingering from the blowout against Alabama. Head coach Derek Mason said as much, saying the team is trying to get “it behind us and get back to work.”

Vanderbilt also feels like they have the talent to bounce back against the Gators, with leading wide receiver Trent Sherfield (12 rec., 248 yards, one touchdown) saying this one of the best teams Mason has had in Nashville:

TS: "I think this team is the best team coach Mason has had here. We have a lot of good players and we know exactly who we are."

To get back in the win column, they’ll lean on their stud running back and Gainesville native Ralph Webb, and quarterback Kyle Shurmur.

Webb has totaled 164 yards and two touchdowns this season, but has killed the Gators in the past. He ran for 118 yards on 22 carries, including a 74-yard score his last time in he played his hometown team, and racked up 110 yards in last season’s meeting in Nashville.

Shurmur has thrown for over 700 yards this season, leads the fourth most efficient pass offense in the SEC (150.25), and was integral in the Commodores big-time win over Kansas State. Shurmur scored the game winning touchdown on a two-yard run in the fourth quarter to give Derek Mason’s team the 14-7 victory.

The Commodores excel in the pass game on both sides of the ball though. They hold the top ranked pass defense in the SEC (116.8 yards per game). That’s thanks both to pressure on the quarterback and talent and leadership in the secondary.

Up front, Charles Wright figures to provide the pressure, as he already has six sacks on the season. The secondary meanwhile features, three seniors, a junior, and a stud sophomore in cornerback Joejuan Williams. Williams earned the Bednarik Player of the Week award after the Kansas State game after recording eight tackles and three pass-breakups. The battle between the formidable secondary and the Gators’ Cleveland, Powell, and Toney trio will be interesting to monitor as it’ll go a long way in determining Del Rio’s success in his first game back as the starter.

Kick off is at noon from Ben Hill Griffin Stadium.