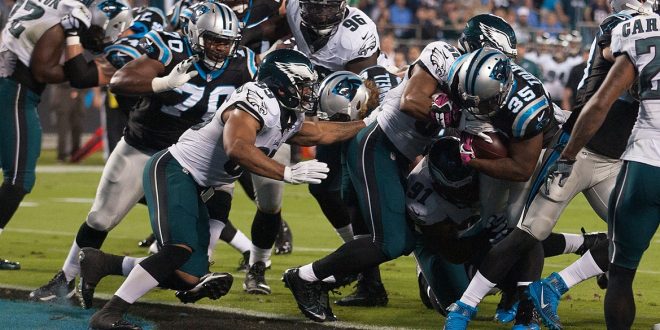 Two teams will go head-to-head tonight to determine who will earn the number one spot in the NFC. The Carolina Panthers and the Philadelphia Eagles are both 4-1 as they head into this game.

The last time these two teams matched up back in 2015 the Panthers won 27-16. For both teams this will be a match-up of not only skill, but execution.

The Eagles are traveling to Panthers’ stadium looking for another win tonight. In order to be as prepared as possible, The Philadelphia Eagles held practice last night despite the fact that it might make them a little tired before the game.

Carson Wentz, the Quarterback for the Eagles, knows that this game is going to be a challenge for several reasons. Not only will the Eagles be playing with minimal rest, but right tackle Lane Johnson will not be joining them on the field.

During their game against the Cardinals, Johnson suffered a head injury, but the Panthers went on to win 34-7. Despite the absence of Johnson, the Eagles are still confident in their ability to come out with a win tonight.

"If we were to play today, I'd have to be ready to play" https://t.co/jjv9BDgJ9x

Panthers quarterback Cam Newton expresses his thoughts that their key to victory tonight against the Eagles will be due to not giving advantage to the Eagles defense. However, their success against the Eagles Defense will be determined on their preparedness and their ability to execute plays in the game.

This NFL showdown will take place at Bank of America stadium. Kick off is at 8:25 PM. Tune into ESPN Gainesville 98.1 FM 850 AM for live coverage of the game starting at 7:45pm.