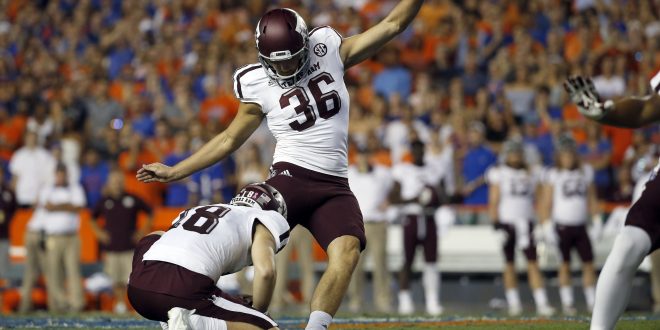 Little Things Add Up in Gator Football Loss To Aggies

In the Florida Gators’ 19-17 loss to Texas A&M, you can go back to some plays that could have turned the game one way or the other.  Looking closer at some of these plays and decisions that may not have seemed key in the moment, shed light on how a failure to do the little things right, hurt Florida in the end.

After running back Dre Massey’s touchdown run to put the Gators up by seven to start the fourth quarter, field goal kicker Eddy Pineiro didn’t help in keeping the Aggies at bay on the following possession. He sent the kick out of bounds, setting up Texas A&M on their 35-yard line.

The Aggies followed that up with a 40-yard pass to wide receiver and punt returner Christian Kirk, to set them up at Florida’s 25-yard line.

They came out of the drive with a field goal, chipping away at the Gator lead.

Giving A&M punt returner Christian Kirk a chance to run a kick back late in the game is something you stay away from.  In 2016, Kirk totaled 282 yards on 14 returns and turned three of them into touchdowns. The season before his stats are similar—341 yards, 14 return, and two touchdowns.

A part of the Gator game plan was to avoid kicking to Kirk at all costs but they managed to find him downfield three different times. He ran up 58 yards on those returns, including a key return late in the game.

With Texas A&M down by just one with 4:20 to go, the Gators kicked it to Kirk and Johnny Townsend’s 46 yard punt was ran back 43 yards by Kirk to put the Aggies on Florida’s 39 yard-line.  Eventually, A&M kicked the game winning field goal.

"That's what supposed to happen, but it didn't, and it came back and bit us."– Mac on punting away from Christian Kirk

When asked about the ineffective effort to avoid Kirk on punts, McElwain immediately showed frustration.

“The plan was to pin it on the boundary or kick it out of bounds on the punt and not let that guy return it,” he said. “The plan didn’t work, we didn’t execute, and we didn’t get the guy to the ground.”

Freshman Adarius Lemons returned his first ever kickoffs for the Gators this season and although he fared well in most of his debut at the position, he hurt the team in field position on his last return.

With 7:37 left in the fourth quarter, A&M’s Branden Mann booted the ball into the Gator end zone. Instead of taking a knee, Lemons came out of the end zone, and only ran it back to the 15 yard line.  The offense only lasted five plays for 21 yards on the drive and had to punt; that was the one that landed in Kirk’s hands, which he ran back for 43 yards.

With a team that seems to have so little margin for error to win or lose a game, those mistakes can prove costly…and they did on this night.