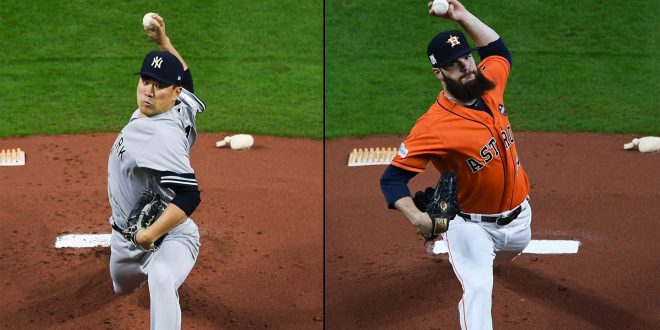 Keuchel and Tanaka Face Off Again in ALCS Game 5

Postseason baseball is in full swing. The ALCS will continue tonight as the Yankees host the Astros for Game 5.

The ALCS was off to a good start for the Astros, who defeated the Yankees in the first two games. In Game 1, winning pitcher Dallas Keuchel pitched 7 shutout innings. Houston gave up only one run: a Greg Bird homer in the top of the ninth. Still, the Astros came away with a 2-1 win.

Game 2 was uncertain until the end. The game was tied 1-1 into the bottom of the ninth, threatening extra innings. Carlos Correa stepped up to the plate and hit an RBI Double off of Aroldis Chapman, bringing home José Altuve and earning a walk-off 2-1 win for the Astros.

The Yankees quickly turned things around when they came home to Yankee Stadium. New York was off to a quick eight run lead in Game 3. A single unearned run for the Astros in the ninth was not enough to overcome the Bronx Bombers.

Aaron Judge and Gary Sanchez, the Baby Bombers, coming through. Sanchez's two-run double puts the #Yankees up 6-4. The place is shaking.

New York tied the series in Game 4 with a 6-4 win. By the seventh inning stretch, the Astros were off to a 4-0 lead. The New York bullpen was able to hold off Houston scoring in the final three innings while the Yankees lineup scored 6 runs for the win. Gary Sánchez earned the winning run on a double that brought home Aaron Judge and Didi Gregorius.

The series continues tonight in the Bronx. Dallas Keuchel will take the mound for the Astros as Masahiro Tanaka starts for the Yankees, the same matchup that started Game 1. Things went well for Keuchel early this series, but the Yankees have stepped up their game at home and he may have to take a different approach. Keuchel relied on his slider and his fastball in Game 1, breaking out his famous changeup only once in seven scoreless innings. New York will be preparing for that changeup, expecting Keuchel to pitch differently tonight as the stakes are higher.

Houston’s bullpen was middle-of-the-line during the regular season and not much has changed in the playoffs. This postseason, the Astros have relied on starters as relievers to secure their wins. Impressive starters have gotten them this far, but the Yankees won’t be easy on Keuchel tonight. They will likely try to wear him out and get him off the mound to bring out the weak bullpen.

Tanaka’s Game 1 loss against Keuchel does not necessarily foreshadow tonight’s outcome. Historically, Tanaka has had significantly more success at home, as have the Yankees this series. Tanaka boasts a 3.22 ERA in the Bronx this season, but on the road his ERA is 6.48. Additionally, Keuchel is not the only one who reserved a trusty weapon on the mound in Game 1. The ALCS hasn’t seen much of Tanaka’s splitter, but the pitch is likely to show itself tonight against the Yankees lineup.

The Yankees and the Astros continue their ALCS battle in Game 5 tonight. First pitch is scheduled for 5:08p.m.

I grew up in the Washington, DC area and now I'm a Gator. I'll always be learning more about myself, others and the world around me. And I'll always be talking about sports.
@kelsey_godman
Previous Dodgers Take Commanding 3-0 Lead in NLCS
Next SEC Media Day Recap