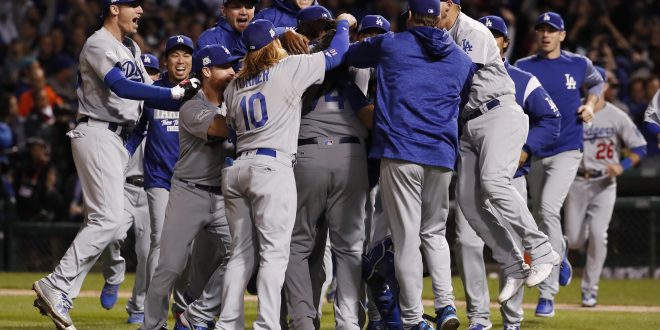 MLB Postseason: Dodgers are heading to the World Series

After defeating the Chicago Cubs on Thursday night and winning the pennant, the Los Angeles Dodgers will head to the World Series for the first time in 29 years.

What started off as a typical postseason game, and the chance for another win at home for the Cubs, soon turned into a blowout that resulted in an 11-1 victory for the Dodgers.

Many players and factors contributed to the Dodgers success in Game 5 of the National League Championship Series.

Some of those include ace pitcher Clayton Kershaw striking out five batters and only allowing one run on three hits over his six solid innings pitched, while Enrique Hernández blasted three home runs and collected seven RBI’s.

In the top of the 1st, and with Chris Taylor already on base, Cody Bellinger hit a double into right field. This allowed Taylor to score and the Dodgers were first on the scoreboard 1-0.

Then in the top of the 2nd, Hernández hit his first home run of the night making it 2-0. However, the top of the third is when the Dodgers lit up the scoreboard.

Taylor hit a ground-rule double down the left-field line bringing Justin Turner up to bat. Turner singles, which allowed Taylor to score making it 3-0.

With the bases loaded, the Cubs retired Quintana after two innings and put in Hector Rondon.

Next up for the Dodgers was Logan Forsythe, who struck out on a foul tip. With only one out in the top of the third, Hernández was back in the batter’s box. However, Hernández did not let the pressure get to him.

Hernández launched a grand slam to right-center field making it 7-0. He drove in Turner, Bellinger, and Puig earning him his fifth RBI of the night.

Top of the 4th

Rondon finished the 3rd inning without giving up any more runs but was replaced by John Lackey in the 4th. However, after a crazy and exciting 3rd inning, the 4th inning was anything but calm.

In the top of the 4th, Taylor singled on a ground ball. After a strikeout by Turner, Bellinger was back in the batter’s box again. Bellinger singled to right field again which allowed Taylor to reach second base.

With Puig at the plate and one out, Lackey threw a wild pitch which allowed Taylor to reach third and Bellinger to reach second. After the wild pitch, Puig reached first on a fielder’s choice out, which resulted in Cubs’ third baseman Kris Bryant throwing to catcher Willson Contreras and to successfully get Taylor out at home.

Next up, Forsythe hit a double to left field, which drove in Bellinger and Puig, making it 9-0. With two outs left in the top of the 4th, Lackey threw another wild pitch, with Hernández at the plate, which allowed Forsythe to reach third.

However, with a pop out by Hernández to Addison Russell, the inning ended.

Remainder of the Game

Kershaw was able to keep the Cubs scoreless through the 3rd inning, but that ended in the bottom of the 4th when they scored their only run of the game. Bryant homered on a fly ball to left field making it 9-1.

Over the next couple of innings, the Dodgers and Cubs remained scoreless. And over the next few inning, there were a couple of pitching changes.

In the top of the 6th, Brian Duensing replaced Lackey and in the bottom of the 7th, after a solid performance by Kershaw, Kenta Maeda was brought in.

In the top of the 8th, Mike Montgomery replaced Duensing. Maeda was replaced by Brandon Morrow in the bottom of the 8th.

The scoreless streak ended in the top of the 9th though.

Puig singled on a ground ball to center field and after Forsythe got out on a flyout, Hernández was back at the plate. Then, he did it again.

Hernández homered to left center field and drove in Puig. With his seventh RBI and third home run of the night, the Dodgers were up 11-1.

In the bottom of the ninth, Kenley Jansen replaced Morrow, and the Dodgers ended the game.

Hernández’s incredible night also made for a historic one too. He is the first Dodgers player to hit three home runs in a postseason game, and the 10th in MLB history to do so.

In addition to breaking and tying records, Turner and Taylor were named co-MVPs of the NLCS.

After the game, Kershaw expressed how incredible the feeling is, and how each night a different guy contributes to their success.

The Dodgers will host the winner of the New York Yankees/Houston Astros series for game one of the Fall Classic. The game is set for Tuesday and the time is TBA.

Kershaw will start Game 1 for the Dodgers.

Previous Gator Volleyball Preview: Showdown in Tuscaloosa
Next Missouri Looks to Turn Season Around in Homecoming Game vs. Idaho