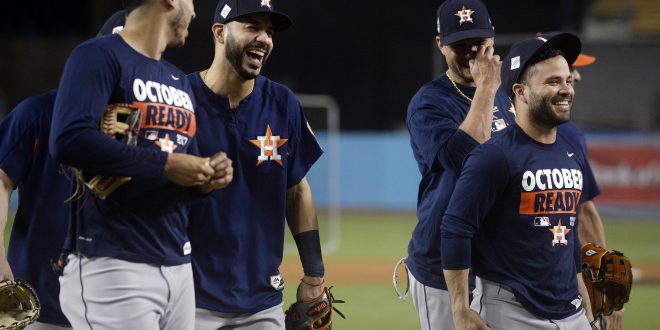 The World Series is finally here. For the first time since 1970, two 100-win teams will meet in the Fall Classic. The offensive-minded AL champion Houston Astros will take on the pitching and defensive-minded NL champion Los Angeles Dodgers for a chance at baseball glory.

Both teams dominated the regular season with run differentials close to 200 (196 for the Astros, 190 for the Dodgers). The Astros, who are AL champions for the first time ever, got off to a 42-16 start and never looked back as they reached 101 wins. What’s especially significant for the Astros is that they were absolutely terrible not too long ago, posting three straight 100-loss seasons from 2011-2013. Houston will be looking to win its first World Series in franchise history. The team did advance to the World Series once in 2005 as a member of the NL, only to be swept by the Chicago White Sox. The Dodgers, meanwhile, went on an absurd 56-11 run at one point en route to an MLB-best 104-58 record. The Dodgers are in the World Series for the first time since 1988 and will be looking to win their seventh title in franchise history.

How the Astros Got Here

Houston’s offense was far and away the best in the MLB, leading the league in nearly every major offensive category. The Astros had 121 weighted runs created (wRC+), the fourth highest in the last 115 years. Their slugging percentage of .478 was the highest in the majors since the 2003 Boston Red Sox. Houston’s offense was paced by MVP candidate Jose Altuve, who led the AL with a .346 batting average. In addition, he had 112 runs, 204 hits (only player in the AL with 200+ hits), 24 home runs and a .410 on-base percentage. The Astros’ mighty offense doesn’t just start with Altuve, though. Carlos Correa had a batting average of .315 and also hit 24 home runs. Marwin Gonzalez led the team with 90 RBIs and George Springer led the team with 34 home runs.

The Astros also got contributions from a very solid pitching staff, which was fifth in the AL in ERA (4.12), second in strikeouts (1,593) and third in batting average allowed (.240). Dallas Keuchel led the way with a 14-5 record and a 2.90 ERA. The staff got a huge addition in Justin Verlander, who was traded from the Detroit Tigers on August 31. Verlander was named ALCS MVP.

Of course, the Astros are not without their weaknesses. Their bullpen ERA of 4.27 was 17th in the majors. Against a Dodgers team that averaged six runs in the NL playoffs, Houston will need its bullpen to step up.

How the Dodgers Got Here

The Dodgers’ offense was not too shabby itself, ranking 12th in the MLB in runs scored (770), fourth in doubles (312), 11th in home runs (221) and eighth in slugging percentage (.437). The offense was paced by rookie Cody Bellinger, who was second in the NL with 39 home runs. However, the true strength of the team was its pitching. The Dodgers were second in the majors in ERA (3.38), third in saves (51), second in shutouts (16), second in earned runs allowed (543), fifth in strikeouts (1,549) and first in batting average allowed (.228). Also, unlike the Astros, the Dodgers have a very good bullpen, leading the NL with a 3.38 ERA. It did not allow a single run against the Chicago Cubs in 17 innings in the NLCS.

The Dodgers’ pitching is led by Clayton Kershaw. Kershaw led the NL with 18 wins and a 2.31 ERA. He was also second in WHIP (0.95) and eighth in strikeouts (202). Astros manager AJ Hinch is confident in his group, saying that they do not fear Kershaw. Other notable Dodgers pitchers include Alex Wood (16-3 record), Kenley Jansen (NL-leading 41 saves and a 1.32 ERA) and Brandon Morrow (0.92 WHIP).

While the Dodgers’ offense is nowhere near as good as the Astros, its dominant pitching could be enough to lead them to a championship.