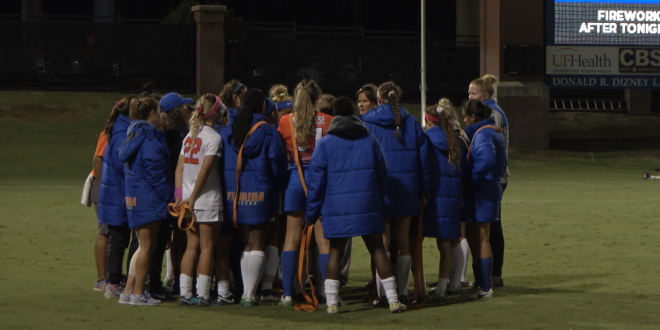 The 17th ranked Florida soccer team closed the regular season after losing 1-0 against the number three South Carolina Gamecocks on Thursday in Gainesville.

Florida came to this game in a great form after winning their last two games against the Kentucky Wildcats (2-0) and Tennessee Volunteers (2-1). But it could not continue it because of the aggressive high pressure applied by the Gamecocks throughout the entire game.

The Gators did some adjustments to the 4-2-3-1 lineup entering this game: Parker Roberts played on the center defender alongside Rachelle Smith; Deanne Rose played on the left wing position; Sarah Troccoli played as the creative midfielder; Madison Alexander started the game playing as the central striker.

Early in the game, Rose struggled playing in that position. She got beaten by her markers every time she faced them in one-on-one situations. That forced the Gators to make a tactical move to start to create danger in the last third and confuse defenders positionally. She switch positions with Mayra Pelayo from one wing to the other. Pelayo and Julia Lester paired very well during a stretch of the first half on the left side. Both players made good one-touch passes and exploited spaces between defenders on a couple of occasions. But that was not enough for the Gators on offense. They still looked very predictable in each offensive transition. The Gamecocks outshot the Gators six shots to three in the first half.

Things did not improve for the Gators in the second half. The Gamecocks continued applying their high-pressure on Florida’s backline. Savannah McCaskill, a Gamecock striker, had a fantastic performance at pressuring Florida’s possession on the back and taking advantage of passing mistakes.

In the 80th minute, Elexa Bahr broke the tie after a staggering individual play. She made the cut through the middle of the box, ran the ball, left defenders behind and made an aesthetic shot to the left corner of the net.

Even though Roberts did not have a great night playing as a center defender, Gator coach Becky Burleigh praised her effort and willingness to help her team playing a different role.

Florida closed the regular season with a 13-5 overall record (7-3 record in the SEC. The Gators will start postseason play next week at the SEC Tournament in Orange Beach, Alabama.