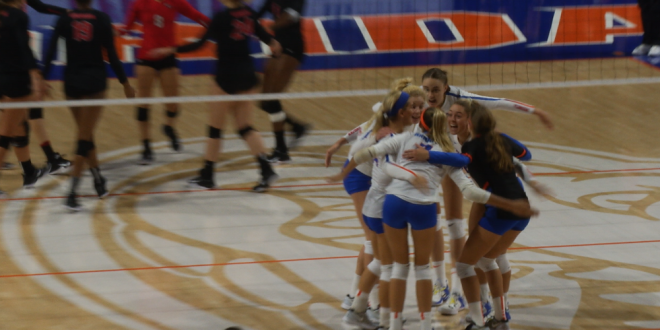 The Florida Gators volleyball team recovered well from their first loss of the season last week as they collected two road wins.

Florida will now try to build another major win streak as they have another two-match weekend ahead of them. On Friday night, the Gators will be going up against a South Carolina team that is coming in with a (10-10, 3-5 SEC) record.

The weekend wraps up with a Sunday afternoon road match-up between Florida and Mississippi State. The Bulldogs have struggled this year as they currently have a (9-15, 0-9 SEC) record. This will be an interesting game for the Gators in terms of the mentality they bring into the match. A big rematch between Florida and Kentucky is the next match on the schedule, so UF may find themselves in the perfect ‘trap game’.

Back On A Roll

After suffering their first loss of the season at the hands of Kentucky, Florida went back to doing what they did best–playing defense. It was their defensive play that stood out in their road wins against Alabama and Auburn. Gators head coach Mary wise said that it is on defense where her team shows a complete performance.

Sophomore Rachael Kramer talked about how the team seems to be more excited the deeper they get into SEC play.

Historically, the Gators have had their way with South Carolina. Florida leads the all-time series 56-7 and have not lost since 2006. South Carolina is looking to beat the Gators at home for the first time since 1986. In their last meeting, Florida won in three sets at home.

Last time out, the Gamecocks were defeated at home by Alabama in a tough five sets. The Gators defeated the Crimson Tide on the road in three sets.

Wise says that the key to Florida coming out on top Friday night is limiting Sophomore McKayla Shields. The Sophomore broke records in her freshman year but that is only the beginning. Shields’ Sophomore campaign has been even better as she has improved her kills per set from 3.25 to 3.60. She has already surpassed her digs from last year and is sixth in the SEC in double-doubles.

It all gets started Friday night at 7 p.m. at the O’Connell Center and will broadcast live on SEC Network+.

On Sunday afternoon, Mississippi State will be looking to do something they have never done before- beat Florida.

The Bulldogs sport a 0-48 record against the Gators and are 0-39 against Mary Wise. Just getting to a fifth set would be a program first for the Bulldogs. It will be a quick turnaround for Florida as they will have to get on the road after their home match against South Carolina. Wise says that they will prepare for the Bulldogs the same way they did for Auburn last weekend.

Even with the top-ten rematch with Kentucky on the way, Kramer says that the Gators will not be overlooking anyone because  she knows that her team has a target on their backs.

The match between Florida and Mississippi State begins at 1 p.m. on Sunday and can be watched on SEC Network+.

Previous World Series Game 3 Preview
Next Florida-Georgia or Georgia-Florida? Either Way, The Players Are Ready