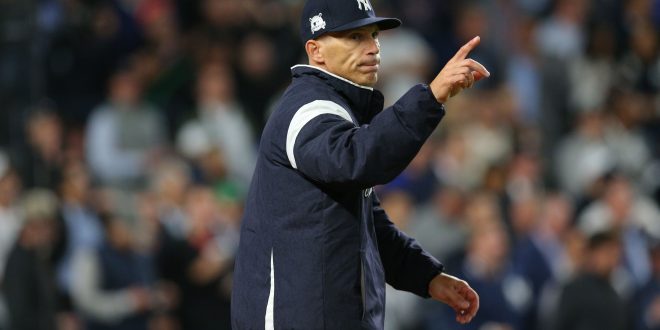 Less than a week ago, the New York Yankees were one game away from going to the World Series, playing in game seven of the ALCS against the Houston Astros. While losing 4-0 and having their season end, a majority Yankee fans felt the season went better than expected.

Most thought that this would be a rebuilding year as the Yankees would bring in fresh faces and young talent for the future. Few experts predicted the season they would have and how far they would get.

However, after going 91-71 overall and reaching the ALCS, the Yankees asked their longtime manager Joe Girardi to step down.

Today the @yankees announced that Joe Girardi will not return as manager in 2018.

Joe Girardi will not return as @Yankees manager. He led club to 6 postseason berths and 2009 #WorldSeries title. https://t.co/zsUcyLxBho pic.twitter.com/dJNo6kWzF9

The History of Joe

After legendary manager Joe Torre turned down the Yankees offer of another contract in 2007, New York was forced to look for a new manager. When they hired Joe Girardi, many knew immediately that he was going to be around for a while. Girardi chose to wear number 27 to signify his wish to lead the Yankees to their 27th world championship and the collective Yankee fanbase was won over.

Girardi coached the team in 1,620 games and went 910-710 as in the ten years he was the Yankees manager. In his second season, Girardi led the team to their 40th pennant and their 27th World Series. Many fans thought, with how young Girardi was, that he would be there for decades.

After the 2009 season, the Yankees never could live up to expectations. Always in contention but never winning the last game of the season. Injuries and star players past their prime hindering their success, Girardi was unable to lead New York to another World Series run again. Until 2017.

After bringing in young talents like Aaron Judge and Greg Bird, Girardi was able to put together a major contender and make another run for the Yankees’ 28th. While falling short, many fans saw the bright future of the organization. Those same fans would be shocked less than a week later.

While the rest of the baseball world was shocked at the decision, a few in the Yankee front office was not. Recent news has surfaced about Girardi and General Manager Brian Cashman’s increasing dissension. Not many in the front office were surprised as Girardi departure was seen as a long time coming. After ten years working together, Cashman recommended to Hal Steinbrenner, the team’s owner, that Girardi be asked not to return.

The relationship between Girardi and Cashman deteriorated over recent years. The front office felt that Girardi’s coaching style and intensity was not a good fit for a team with so many young players on the roster.

Girardi was nonetheless disappointed by the decision. In a statement released by his agent, Girardi said, “With a heavy heart, I come to you because the Yankees have decided not to bring me back. I’d like to thank the fans for their great support as a player, coach and manager and the lasting memories of their passion and excitement during the playoff games.” Girardi finished his decade-long tenure with six playoff appearances and a World Series win.

The Yankees will be replacing the manager who guided New York to the best record in baseball since taking over in 2008. pic.twitter.com/GfrPs2soie

With Girardi out, names of candidates is already begun to be discussed. Many expect the team to hire within the organization. With good bench coaches that helped the team to the ALCS this year, the Yankees have options.

Yankee bench coach Rob Thomson likely will get an interview for the Yankees’ managerial opening very soon. While some have brought up Tony Pena’s name, it is not expected as Pena came with Girardi in 2008. It is predicted that he will be looking elsewhere for a job when his contract expires on Tuesday.

Outside candidates that are available are Dusty Baker, Brad Ausmus, and John Farrell. All were recently let go by their respective teams and will most likely be receiving calls for interviews soon. All is speculation as any name could come up in the next couple of weeks.