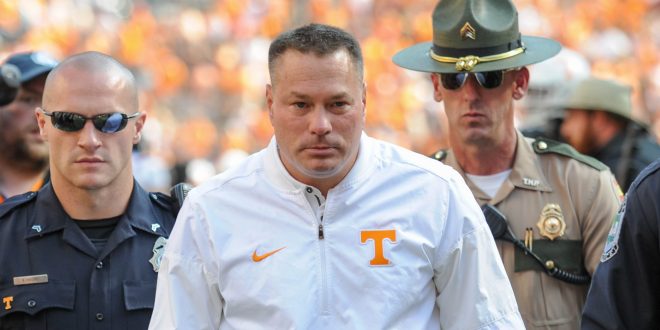 The Tennessee Volunteers will battle the Southern Miss Golden Eagles this Saturday at 7:30 PM EST in Tennessee. Tennessee has a record of 3-5 and are currently on a four game losing streak. Southern Miss has a 5-3 wining record. Tennessee must win this game to have a shot at being a contender for the bowl.

As for Southern Miss, they will focus on their offense this game.

“I think Southern Miss would like to be a more balanced offense, but their lack of production from the receiver position has caused them to rely heavily on the run game behind the quarterback position and running back Ito Smith,” David West told Saturday Down South. Ito Smith is a tailback for the Golden Eagles.

Butch Jones on the hot seat

Tennessee football head coach Butch Jones has recently been under a lot of fire. Jones has been accused of knowingly playing offensive lineman Brett Kendrick during last Saturdays game with Kentucky while Kendrick had a concussion. Jones disputes this accusation and claims he would never put a player in harm’s way.

When asked about playing Southern Miss, Jones talks about how talented they are. Jones relays their statistics and mentions how crucial Smith is to the team. He ends the praise by saying he’s looking forward to getting back home and competing with them in Neyland stadium this Saturday night.

Southern Miss football tweeted the above graphic to hype their fans up for this weekend’s game. As you can see the team is most definitely getting ready to face off Tennessee. Southern Miss has better stats in all categories listed, besides pass completion percentage. Looking at the stats, Southern Miss has a much more successful offense. We’ll see on Saturday if the Golden Eagles can take the stats to the field against the Vols.

Previous Gator Volleyball Goes For Revenge Against Kentucky
Next Mike White and Co. Get Ready for Thursday’s Exhibition vs. JU

The No. 14 Florida Gators baseball team travels to Miami to take on their in-state …