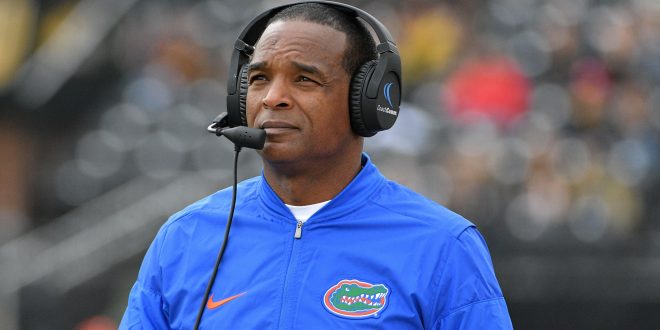 Randy Shannon Looking to Clean Up Mistakes Ahead of South Carolina

After two straight blowout losses, it would be easy for the Gator football team to point fingers to place the blame.

Florida head coach Randy Shannon is having none of that.

And he isn’t making any right now, even with all the injuries the Gators are currently facing. That’s left him and the team to lean on younger leaders like linebacker David Reese, who called out the team after the 45-16 loss to Missouri this past weekend.

#Gators LB David Reese after the game as one of the team’s top young leaders … pic.twitter.com/prNY9rNxsI

“We don’t have any veterans,” Shannon said. “We’ve got to build on a guy like Reese. Build on some other guys to start fast and build some things.”
“Early in the year when we had a lot of veterans on this team, we started fast. But now, we’re trying to get these young guys to crank it up a little bit because they’re at Florida. We don’t make any excuses because you’re young. You’re a veteran now. You’ve played some games and you’re representing the Gators.”

That’s the philosophy Shannon is hoping to instill in his team as they prepare for South Carolina this week. The Gators are 3-5 and must win out in order to secure bowl eligibility.

That starts with a good week of practice, which Shannon says Florida has had since falling to Missouri.

“Good, flying around, a little bit better than last week,” Shannon said of the team’s attitude. “We started practice and ended it fast. We didn’t have a lot of repeats today in practice.”

And that will be necessary for Florida as they look to clean up the mistakes that have haunted them the past two weeks. According to him, some of the specific ones are failures on third downs and penalties.

When asked about benching Jawaan Taylor and Martez Ivey for penalties against Missouri, Shannon said, “”It’s unacceptable when you have an opportunity to score points and you get negative plays. You’re in the red zone and those things happen, its all mental… those are things we cannot afford.”

Those are in fact things that Florida cannot afford when they visit the team second in the SEC East and already with six wins on the season. And Randy Shannon won’t be making any excuses as he looks to shore those weaknesses up by the time the Gators head to Columbia.