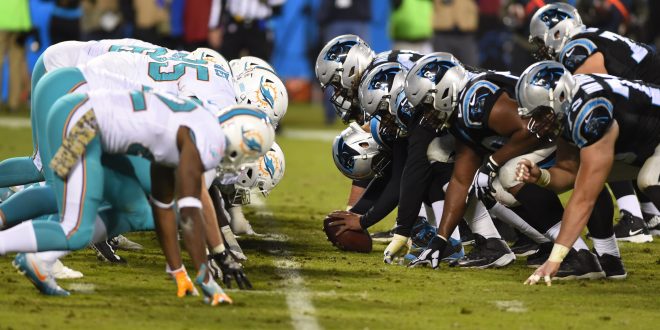 The Miami Dolphins traveled to Charlotte to take on primetime Monday Night Football against the Carolina Panthers only to leave on the wrong end of the 45-21 score.

When you dominate and the whole world is watching! #KeepPounding pic.twitter.com/HDl7cRfMwa

When Carolina’s defense vaulted to no.1 in the league’s ranking last week, Cam Newton took it as a challenge to have the offense match up to the team’s defense.

Newton came into the game thirsty for an incredible offensive game and delivered that, exactly. Cam  threw for 254 yards and grabbed four touchdowns. On top of that, he ran for 98 yards to help the Panthers lock-in a franchise record of 548 yards. The QB is proud of the work they are putting into each game.

RB Jonathan Stewart ran for a season high of 110 yards (first 100 yard game since last december against Washington) while Cam Newton had a 69-yard jaunt on a read option that allowed Carolina to rack-up 294 yards from the ground. Rookie RB Christian McCaffrey scored TDs from both rushing and receiving and WR Devin Funchess also caught five passes and two TDs for the Panthers.

The TDs come in bunches for Funchess! pic.twitter.com/w7rSW967Cp

Now the Panthers are just half a game behind the NFC South-leading Saints. Headcoach for the Panthers, Ron Rivera says that while they head into a bye-week, they are planning to stay focused for their return.

The Dolphins were not ready for primetime last night. Last night against the Panthers, Miami allowed the most points and rushing yards in a game this season. While QB Jay Cutler usually has strong Monday Night Football performances, last night was not the case. After Culter had an interception to Panthers linebacker Luke Kuechly just before the end of the first half, the Dolphins lost all their energy. At halftime, Culter’s pick set up a Cam Newton TD pass that gave Carolina a 17-7 which solidfied the Panther’s dominance for the rest of the game. Cutler says that a better start in games will lead to success.

Dolphins will return home this week and face in state rival, Tampa Bay on Sunday.