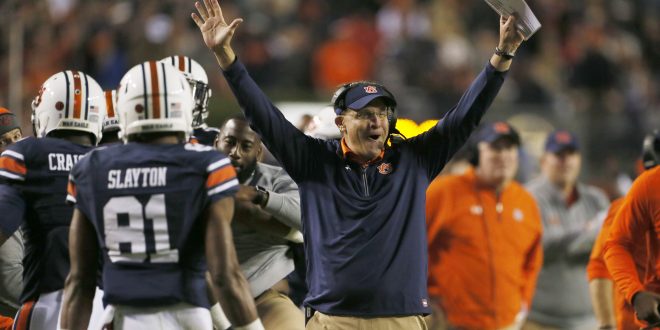 Following previously-ranked No. 1 Georgia’s loss to Auburn and undefeated Miami’s dominating victory over former No. 3 Notre Dame, shakeup at the top of the College Football Playoff rankings was sure to come. With the release of the rankings’ newest edition on Tuesday night, two new teams have emerged in the top four, including three SEC teams in the top seven.

Following a close 31-24 victory at Mississippi State on Saturday night, the Alabama Crimson Tide regain a familiar No. 1 spot. Led by sophomore quarterback Jalen Hurts, Alabama’s offense has been difficult to stop. The tide have surpassed 30 points in seven of their ten games, including 474.10 yards per game. With two weeks remaining in the regular season, including a matchup with No. 6 Auburn, the Tide control their own destiny heading down the final stretch.

Meanwhile the Georgia Bulldogs dropped to No. 7 following their 40-17 loss at Auburn. While down, the Bulldogs will have the opportunity to bounce back this weekend. Georgia will host Kentucky (7-3) on Saturday afternoon, with a chance to defeat every SEC East division opponent in 2017.

Georgia has already clinched their spot in the SEC Championship game following their Week 10 victory over South Carolina. With an opportunity to face an undefeated Alabama, or a rematch with Auburn, the Bulldogs will remain in contention for a spot in the College Football Playoff.

Matthew is currently a senior, majoring in telecommunications with a minor in business administration.
@matt_levay
Previous Duke’s Stacked Roster Dominates Michigan State in Champions Classic
Next No. 8 Florida Prepares For North Florida