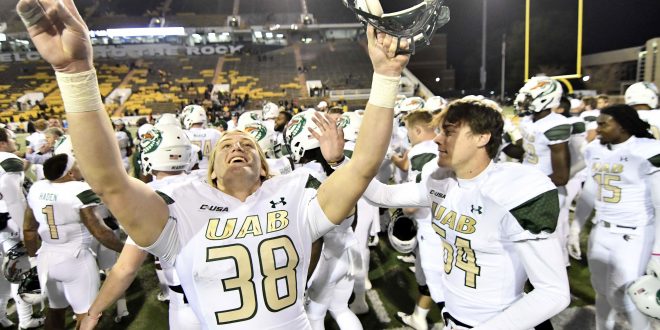 The UAB Blazers are a program that was shut down two years ago. They have managed to not only resurrect the football program, but are rolling into bowl season. Sitting at 7-3 so far, they look to get their eighth win against the Florida Gators.

Hear what @CoachBillClark said in advance of UAB's game this weekend @GatorsFB https://t.co/ORMfviZyM1

From Shut Down to Resurrected

The story of the Blazers is a shocking one. The program faced a shutdown in 2014, and was resurrected shortly after. In the 2017 season, the Blazers are 7-3 heading into a battle against Florida. Blazers’ head coach Bill Clark joined Sportscene with Steve Russell to talk about the resurrection of the program.

Clark says that the biggest pitch toward getting the program back was a promise to be competitive.

With UAB bringing back their program, the expectations that were placed certainly did not include the program being where they are right now. While they hold a 2-2 conference record on the season, they currently ride a three-game win streak, with their last loss coming on Oct. 21. That game was a close 24-23 loss to the Charlotte 49ers.

One of the other big things for Clark was a commitment to run the program and “do things the right way.” With a program that is very much in the mix as the No. 2 team in the Conference-USA standings, the rise of UAB football looks to continue towards a C-USA championship. In order for that to happen, the once deceased program must continue its rise against a struggling Florida team.

The Blazers are looking to capitalize and further build on the Cinderella season with a victory against an SEC opponent.

The team is now looking ahead to a matchup against a power-five conference opponent. The Gators are looking to rebound in a big way, but will have to go against the excitement that the program is facing. While looking at a conference that holds a handful of top teams in the top-25 rankings, the Blazers are chomping at the bit to take down the Gators in an upset victory on the road this Saturday.

The UAB Blazers travel to The Swamp on Saturday to face the Florida Gators. UAB is coming off a 24-19 victory on the road against the UT San Antonio Roadrunners. The Blazers look to continue the winning ways of the program in the Gators’ first home game since Oct. 14 against the Texas A&M Aggies. The game is set for a 4 p.m. kickoff on the SEC Network.