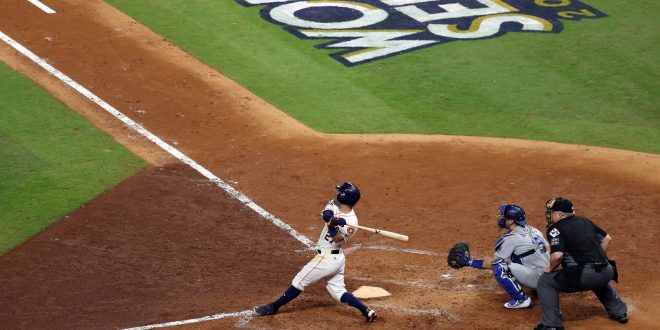 As the Astros finished off a season for the history books, 2nd Baseman Jose Altuve still had one more trophy in his sights. After leading his team all year against all odds, Jose Altuve was announced as the American League MVP Award on Thursday.

The All-Star second baseman came from humble beginnings. Born in Venezuela, Jose Altuve always wanted to play baseball. At age 7, he met future major league Catcher Salvador Perez. Together they would begin their journey to American and to the MLB.

At age 16, Altuve was declined a tryout for the Astros because scouts thought he was too short. After some convincing, Altuve was allowed to participate in the tryout and really impressed. He was offered a contract as an undrafted free agent in March of 2007. He would hit .343 in the Venezuelan Summer League soon after and again showed that he could do it all.

Altuve was eventually promoted to the majors in 2011. At 5’6, Altuve barely stood taller than the squatting catcher behind him. Some in the crowd, and maybe even in the dugouts, may have thought that he would never hit it out of the outfield. On a hot Texas day in August, 2011, Altuve hit an inside-the-park home run, for his first major league home-run. From then on, everyone took him seriously. Altuve hit .276 on his 221 at-bats in his first major league season. A career season for most players, most would die for such success. Altuve only got better from there.

The Houston Astros entered 2017 with high expectations as a result of a 84-78 record the previous season. Almost everyone pegged them for a playoff team, no one predicted the run they would go on. Going 101-61 and at one point winning 11 in a row, the Astros torched all who got in their way, and their Venezuelan second basemen lead them.

In addition to being one of the best defensive infielders in the league, Altuve posted a career high in batting average and had over 1250 career hits by the end of the season.

Another player was also making a run for the MVP trophy. Standing at 6 feet and 7 inches and using his power hitting for offense, Outfielder Aaron Judge of the New York Yankees and Jose Altuve could not be more different. The rookie Judge garnered most of the attention from analysts around the league for a majority of the season. Once again Altuve was being looked over.

Bottom of the 9th, one out to go in Game 7 of the World Series. Power hitter Corey Seager up to bat. He swings aggressively at the first pitch. It rolls to the second baseman for a sure out. Jose Altuve makes the final play in the final game of the season to win the Astros’ first World Series in franchise history. Who else but Jose Altuve gets that final play? As if it was scripted like a movie.

Who else but Altuve could they give the MVP trophy to after the season that he had?

On Thursday November 17th, a little over two weeks after winning the World Series, Jose Altuve also won the AL MVP award by a landslide. And no one could say he didn’t earn it.