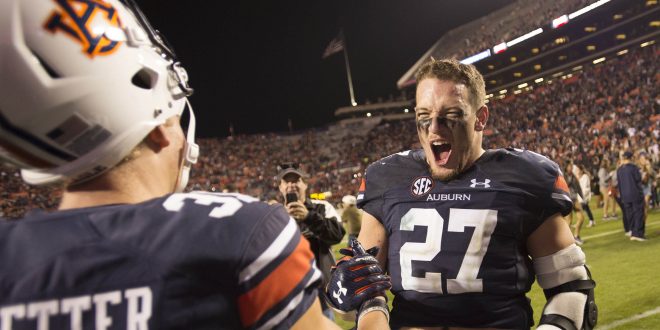 As the college football regular season comes to a close, two SEC West teams have their eyes on a playoff spot. The big matchup this week is Alabama against Auburn in the annual Iron Bowl. These Alabama-based programs are the two candidates to clinch the SEC West title.

With Auburn’s dismantling of previously No. 1-ranked Georgia in Week 11, they have kept themselves relevant in the picture for the SEC title, even with two losses on their record. Considering those two losses were single-digit losses against ranked opponents away from home, the Tigers could be the first two-loss program to ever make the College Football Playoff.

That being said, undefeated Alabama remains the favorite to come out of the West; but it’s close.

The winner of Alabama and Auburn will be crowned SEC West champions and will play Georgia in the SEC title game on Dec. 2.

It's official, @CollegeGameDay will be on The Plains for the Iron Bowl!#WarEagle pic.twitter.com/rU94svnSEW

Excluding Arkansas, the rest of the SEC West will be facing off against one another.

Thanks to a slow start to the season, LSU will have no more impact on the SEC West. After a 30-10 win over Tennessee in Week 12, LSU are attempting to finish the season on a 3-game winning streak.

Arkansas will want to finish with a win after a disappointing season. The Razorbacks are going to end the season with a losing record for the first time since 2013.

Ole Miss, who were ineligible for the 2017 Playoff due to a self-imposed post-season penalty, will be hoping to finish the year with an even record after struggling in conference play with a 2-5 record.