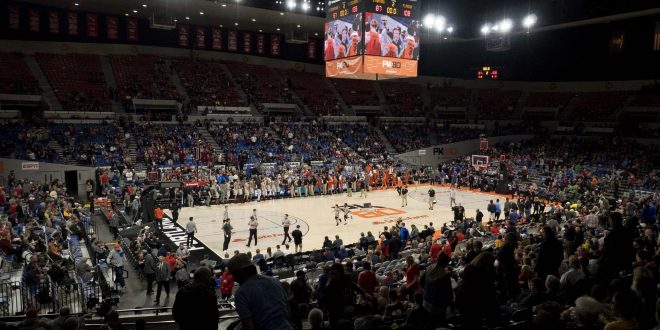 In a matter of two days the Florida Gators can secure two non-conference victories that would pad their resume for months to come. Florida and Duke square off at 10:30 p.m. (approximately) at the Moda Center in the PK80 Tournament Motion bracket finals on Sunday. The Gators took care of business vs. Stanford and squeaked out a 2OT victory against No. 17 Gonzaga. The Blue Devils beat Portland State by 18 in the first round of the tournament and most recently took out Texas in a closer 8-point victory.

Florida and Duke met last season in the Jimmy V Classic at Madison Square Garden. The Gators lost 84-74 as Luke Kennard went off for 29 points. The only starter returning from that Duke team is Grayson Allen.

Six Degrees of Separation: Duke AD Kevin White will be torn tonight as son Mike coaches Florida against Blue Devils in finals of PK80 in Portland.

Chris Chiozza suffered a bruised rib, a swollen right elbow, a right shoulder contusion and a cramped right quad vs. Gonzaga, per ESPN’s Jeff Goodman, but is expected to play. Gorjok Gak is available, but is still on a strict minutes limitation due to an injured knee suffered earlier this season.

Marvin Bagley III had 34 points, but these two were especially pretty. @DukeMBB pic.twitter.com/IS1rhbacAD

Marvin Bagley III will be Florida’s biggest mismatch to date this season. The 6’11”, 234-pound freshman is only 18 years old, but is already one of the nation’s top players. He’s averaging 26 points and 15 rebounds per game in the PK80 Tournament and is shooting 60.8% on the season. Keith Stone, Kevarrius Hayes and Gorjok Gak will most likely split the duty of guarding Bagley.

Bagley tied J.J. Reddick’s Duke freshman scoring record against Texas and can get buckets from just about anywhere on the floor. Mike White and Co. need to make the freshman their No. 1 defensive priority on Sunday if they want to pull off the upset.

Grayson Allen is regarded as college basketball’s public enemy No. 1, but that hasn’t stopped him from wreaking havoc on the NCAA. The senior from Jacksonville is only averaging 13 points per game in the PK80 Tournament, but his ability to lead the Blue Devils has never been in doubt. Outside of the Phil Knight Invitational, Allen has recorded 18.4 points per game. The Gators can’t lose sight of Allen in their all-out defensive pursuit of Marvin Bagley III.

For the first time in program history the Florida Gators have scored 100 points or more in four of their first five games. UF also broke their record for points scored on a neutral court in their 111-105 double-overtime victory over Gonzaga. The record was set in 1978 when Florida scored 109 points vs. Fairfield.

The Gators are averaging 102.6 points per game, the most in the country, and have the 5th-highest three-point percentage in the NCAA. They’re also ranked 13th in the nation in scoring margin. Jalen Hudson, Egor Koulechov, Chris Chiozza and KeVaughn Allen have scored 61.8% of Florida’s points this season and have shot a combined 46.7% from beyond the arc.

Florida-Duke tips off at approximately 10:30 p.m. and can be seen on ESPN/the WatchESPN app. Dan Shulman, Jay Bilas and Jeff Goodman have the call. You can listen to the game on the Gator IMG Sports Network, with Ted Emrich and Mark Wise on the call.