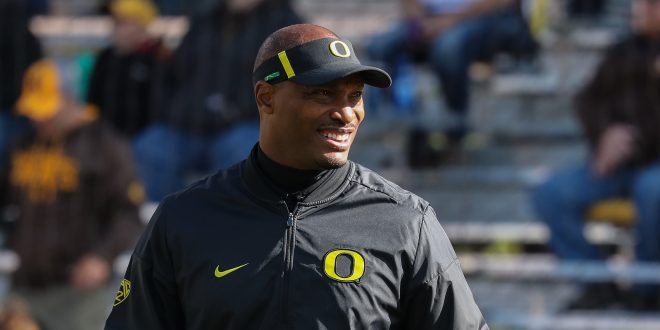 After eight years under the direction of Jimbo Fisher, Florida State is now in need of a new head coach.

Following the news on December 1st that Fisher was leaving the Seminoles to become the head coach of Texas A&M, talks have emerged over who will take Fisher’s place.

Among the names, one has drawn all the attention. Oregon Head Coach Willie Taggart has emerged as the frontrunner for the position. While it’s all speculation up to now, many reports have claimed that Taggart is ready to leave Oregon for the Seminoles.

Who is Willie Taggart?

Currently, the Head Coach of the Oregon Ducks, Taggart originally hails from Bradenton, Florida. He earned first team all-state and all-conference honors as a senior at Bradenton Manatee High School. He then went on to become the star quarterback for the Western Kentucky University Hilltoppers. After playing 4 years in college, he then moved on to his coaching career.

In 1999, Western Kentucky took him on as an assistant until 2006, when Standford hired him as their running backs coach. Throughout his two years with the Cardinals, he helped develop Toby Gerhart, a running back who was a runner-up for the 2009 Heisman Trophy.

In 2010, Taggart left Stanford to return to Western Kentucky, this time as the head coach. Taggart led the Hilltoppers to a 7-5 record in both the 2011 and 2012 season and was invited to a bowl game in 2012. Following that year, Taggart accepted a position as head coach of the University of South Florida Bulls.

His first 2 years with the Bulls were not so successful. In 2012, they finished with a 2-10 record and in 2013 they had a 4-8 record. However, the following year Taggart led the Bulls to an 8-5 record along with a bowl game for the first time in five years. In 2015, the team performed even better, achieving a 10-2 record for the first time in USF history and claiming the AAC East Division.

Then in December of 2016, the University of Oregon hired Taggart as their new head coach, where he has been working since. He has led the team to a 7-5 record this year, earning bowl eligibility as well.

The departure of Jimbo Fisher has left Florida State reeling for a new head coach. They look to find a replacement for Fisher hopefully by the end of this week.

Taggart has been named as one of the top candidates to fill this position. There’s been speculation that Florida State has been meeting with Taggart in order to negotiate a deal to bring him back to his home state.

The Seminoles are trying to move as quickly as possible to announce a new head coach and secure the recruiting class and build upon the roster Jimbo Fisher built throughout his years with FSU.

Florida State is looking for someone with a proven track record of winning. They want a coach who can understand the program and build upon its history. Whether that will be current Oregon head Coach Willie Taggart, we will find out in the upcoming days.