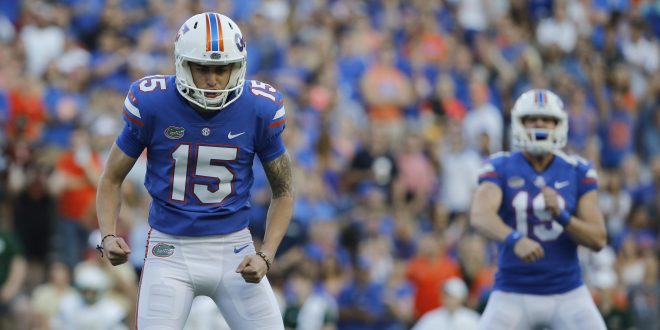 The football season was not good for the Florida Gators by any means. It was a season surrounded by a lot of losses, injuries and problems off the field. But in an individual standpoint, the Gators have something to celebrate. Six Gators received All-SEC awards. New head coach Dan Mullen can be certain of the solid talent he has in his new team.

There were five Gators in the All-SEC second team. Eddy Piñeiro, Gainesville’s culture hero, was the best option on offense for his team for most part of the season, which says a lot about Florida’s offense in 2017. Piñeiro made 17 field goals out of 18 attempts this season.

Taven Bryan made the lives of rival offensive lines and quarterbacks hard. He used his good horizontal running and accurate timing to make 40 total tackles.

Duke Dawson was another defensive talent who excelled for his team in 2017. Dawson’s positional sense, ability to practically get stick to his personal marks and anticipation at reading plays gave him this honor. Dawson made 34 total tackles and four interceptions during the season.

For a team depended on the running game, talents like Martez Ivey were crucial for the Gators to produce offensively. Ivey helped his teammates on offense by holding rivals and opening gaps to create running routes.

CJ Henderson started his collegiate career in the best way possible. The freshman made 22 total tackles, four interceptions and ran for 82 yards, after making those interceptions.

Johny Townsend did special things this season for the Gators to earn a place in the All-SEC first team. Townsend used his good ability to control the field with the good direction that he puts on his punts. He made 3,043 punting yards in 64 attempts.