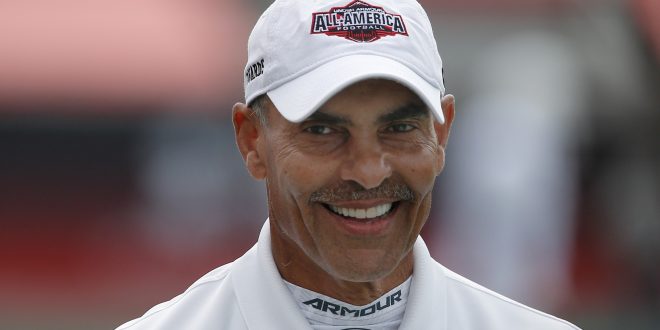 For Herm Edwards football is much more than just a game. Being the head coach for the Arizona State Sun Devils is more than just a job. In his opening press conference, Edwards expressed his reasoning behind reentering the coaching carousel after an extended hiatus. He echoes this during his introductory press conference: uniting diverse men under a common goal. Herm has been a football analyst for ESPN since he left the Kansas City chiefs in 09′. His return to coaching came as a surprise to many. He will be age 64 at the start of next season.

Herm Edwards does not have much exposure to coaching the college game. Especially when compared to the other recent coaching hires made throughout the country. Edwards coached at San Jose State as a defensive assistant from 1987-1989. He worked his way up from defensive backs coach under Marty Schottenheimer to Head coach of the New York jets. Despite never previously holding a coordinator position. He had a mildly successful NFL coaching career. Many now think of him as an analyst before they think football coach. His loud bravado combined with his “Hermisms” make him an interesting character on the sidelines.

Graham out at ASU

The firing of Todd Graham by ASU came as a bit of a shock. Todd Graham brought relevance to a middling Pac-12 school. In his first year he turned the program around by giving it its first winning season in five years, as well as a bowl appearance. Arizona State was trending up the next few years. In 2013 the Sun Devils entered the AP rankings and won the Pac-12 south over UCLA. It was enough to win Graham Pac-12 coach of the year. In 2014 they had another 10 win season. However, the Sun Devils have regressed to lackluster results the last 3 season posting: 6-7, 5-7, and 7-5 records respectively. It wasn’t enough to save his job. Maybe ASU saw the regression and couldn’t wait any longer to get a new face to pair with the new football facilities that were constructed earlier this year.