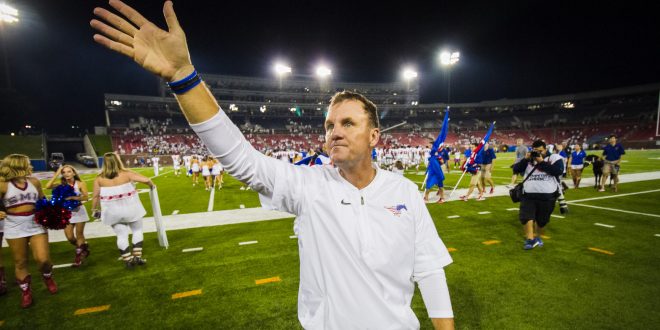 Last month, Arkansas fired Athletic Director Jeff Long and then they fired head coach Bret Bielema. According to SB Nation, Long was always considered a big Bielema backer since Long hired him five years earlier. After losing to Missouri in their last game of the season 48-45, the university decided to part ways with Bielema. He finished his fifth year as head coach with a record of 4-8.

BREAKING: Chad Morris has agreed to be the next Arkansas head coach.

Morris comes into an Arkansas football program that has struggled to be successful in a strong Southeastern Conference since 2011. Following the 2011 season, Arkansas fired scandal-ridden coach Bobby Petrino.

When Petrino was the head coach, the Razorbacks had their best back-to-back seasons in the SEC. They went 21-5 in the 2010-2011 seasons. Petrino led this football program to the 2011 Sugar Bowl against Ohio State.

Post-Petrino the Razorbacks went 4-8 under an interim head coach and the 29-34 in five seasons and 11-29 in the SEC under Bielema.

In 21 DAYS, Arkansas has put in some WORK. #WPS

Chad Morris comes to Fayetteville from SMU. In his three seasons with the Mustangs, he went 14-22, but he has drastically improved that teams performance in that time. Morris went 2-10 in his first season in 2015, 5-7 in his second season, and 7-5 this season.

Morris spent time at a Texas high school as a creator of high-scoring offenses and also at Clemson as the offensive coordinator.

He had signed a three-year extension with SMU before taking this position.

Morris has agreed to a six-year contract with the Razorbacks, according to the Associated Press. He is expected to be paid in the $4 million range per year.