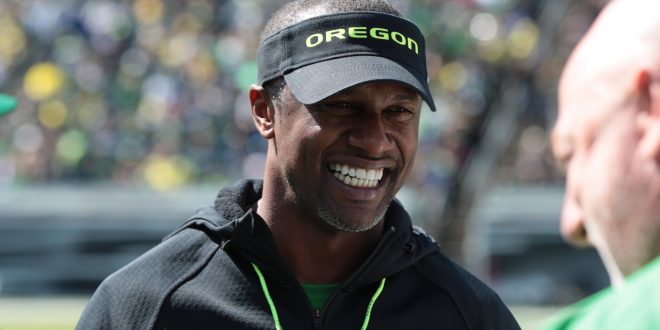 Willie Taggart has landed his dream job as head coach at Florida State University. The Seminoles have a current record of 6-6, and are ranked 6th in Atlantic.  Taggart was previously the head football coach of the Oregon Ducks, who finished the regular season with a record of 7-5. Taggart will be leaving Oregon after only one season to replace Jimbo Fisher as head coach of the Seminoles. Fisher left Florida State after eight seasons to accept the head coaching position at Texas A&M. In the days before Fisher’s hiring many players voiced their distaste for him, saying that if Fisher returned, they wouldn’t. The players have a much better attitude toward Taggart, expressing excitement about their new head coach. Ermon Lane, Seminole senior defensive back, tweeted his reaction to his new coach.

Mood: All smiles in Tallahassee pic.twitter.com/0tqju8FTaa

Florida State was looking for a head coach who had familiarity with the area, recruiting prowess, an offensive mind, and youth. Willie Taggart meets those criteria. Taggart will also be the first African American head football coach at Florida State. Taggart successfully turned both Western Kentucky and University of South Florida around quickly and efficiently. He took Western Kentucky to a bowl trip in 2012 and he flipped University of South Florida’s record from 2-10 too 10-2 in only three seasons.

“It’s pretty amazing how life can put you in places where you need to be,” Taggart said. “… All those years, I wanted to be a ’Nole. Supported the ’Noles. Never gave up on it today. And now we’re here today. … I’m in. I’m in now. And I’m really excited.”

Taggart revealed that was encouraged to accept the offer when his 16 year old son told him to chase his dream.

FSU Football recently posted this tweet to express their excitement about Taggart’s arrival.

We’ll find out how everything plays out when Taggart’s Seminoles take the field in 2018.

Previous No. 5 Florida Looks To Bounce Back On Wednesday Night vs. Loyola-Chicago
Next Arkansas Names Chad Morris as New Head Football Coach