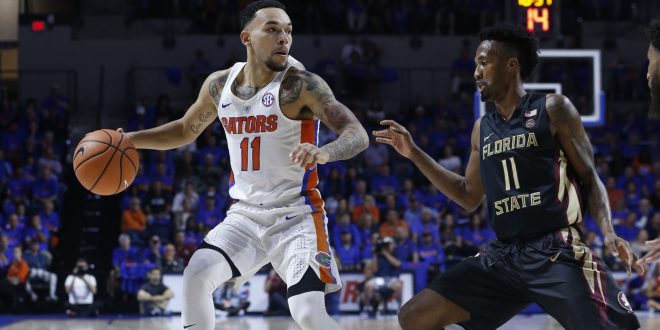 No. 5 Florida Looks To Bounce Back On Wednesday Night vs. Loyola-Chicago

Florida’s Monday meltdown vs. Florida State is now a memory of the past. Coach Mike White and the Gators have moved their focus to Wednesday night’s showdown vs. Loyola-Chicago at the O’Connell Center. The contest will be the first ever meeting between the Gators and Ramblers and a chance for UF to get themselves back on track before Saturday’s showdown in Newark vs. No. 17 Cincinnati.

6’5″, 230-pound sophomore forward Aundre Jackson is the Ramblers’ most potent offensive player. Jackson is averaging 13.8 points per game and has knocked down 55.6% of his three-point looks this season. He went off for 23 points on 10-11 shooting in the team’s most recent game vs. UIC.

Along with Aundre Jackson, Illinois State transfer Clayton Custer and Fairleigh Dickinson transfer Marques Townes are both averaging a little more than 13 points per contest. Custer is the better passer of the two, notching a team-leading 4.3 assists per game.  Townes has the ability to consistently hit shots from beyond the arc (45.5% 3P), but has only scored a combined 13 points in the squad’s last two games vs. UIC and Boise State.

One Game At A Time

As mentioned before, Florida must quickly put their 17-point blowout loss to Florida State on Monday behind them. In that contest, Chris Chiozza had arguably his worst game of the season, going 0-5 from the field with 4 turnovers. Not a single Gator player finished the game as a positive player on the plus/minus scale. Gorjok Gak led the way with a 0 rating, while KeVaughn Allen finished with a season worst -18.

Along with their shooting woes, Florida turned the ball over a season-high 17 times and failed to get out into transition, finishing the contest with only 2 fast-break points. On top of that, the Gators missed 10 of their 15 lay-up attempts vs. the Seminoles

Battle On The Boards

After an atrocious rebounding effort vs. FSU, in which they gave up 23 offensive rebounds, the Gators will have a much easier match-up on Wednesday night vs. Loyola-Chicago. The Ramblers rank 335th out of 351 Division I teams in offensive rebounding percentage.

Chris Chiozza now sits at No. 10 on the Florida all-time assists list after passing Brett Nelson on Monday night with his 408th career dime. He needs four more assists to pass Anthony Moten for the ninth-most assists in Gator history, and 12 more to pass Scottie Wilbekin for No. 8. Chiozza is also shooting three-pointers at a 55.6% clip this season, good for 24th in the nation.

Wednesday night’s game tips-off at 8 p.m. at the O’Connell Center and can be seen on the SEC Network. Mike Morgan and Dane Bradshaw have the television call. You can listen to the game, as always, on the Gator IMG Sports Network. The contest is also being broadcasted nationally on radio on Sirius 135 and XM 191.

While Florida was pressing shots early in possessions last night vs. FSU, their tempo sometimes forces them to play that way. #Gators have the 16th-shortest average offensive possession length in D1. Lowest of any Power5 school besides Louisville, UNC, UCLA, VT and Oklahoma.

#Gators' season-high 17 turnovers last night were very uncharacteristic of the team. UF ranks 6th in the nation in turnover percentage (13.5%).

Previous Is Peyton Manning In The Running To Be The Next Tennessee Head Coach?
Next Florida State hires Taggart